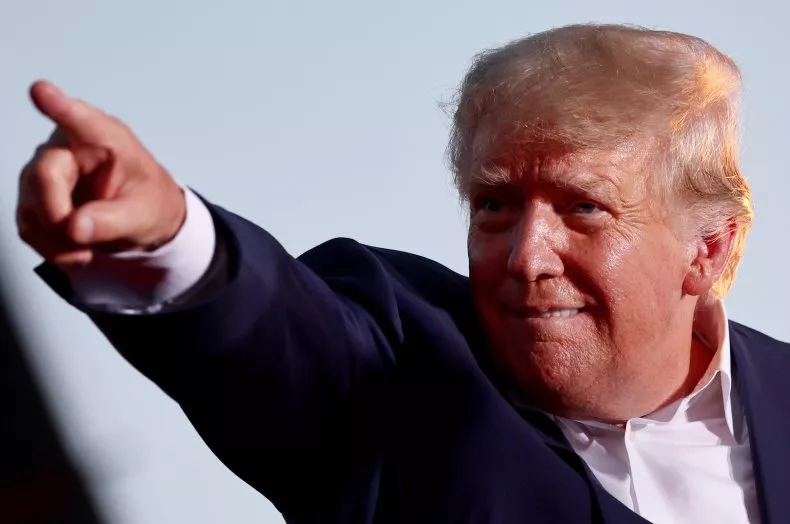 (NOVEMBER 2, 2022 / NEWSWEEK) in recent weeks, we’ve seen Jew-hatred promoted by rapper and designer Ye (formerly known as Kanye West), basketball player Kyrie Irving, and the legion of ignorant haters inspired by their bigotry. On a per capita basis, Jews are the victims of more hate crimes in America than any other group; over 10 times as many as Asians or Latinos, more than twice as many as Muslims or African Americans, and 50% more than episodes of violence pertaining to sexual orientation or gender identity.

We Jews are attacked in the streets, in synagogues, and on college campuses. Real Jew-hatred is a serious problem, which makes it even more disturbing when accusations of antisemitism are leveled for political reasons, as happens too often against former President Donald Trump.

Last month, President Trump posted on Truth Social, “No President has done more for Israel than I have. Somewhat surprisingly, however, our wonderful Evangelicals are far more appreciative of this than the people of the Jewish faith, especially those living in the U.S. Those living in Israel, though, are a different story – Highest approval rating in the World, could easily be P.M.! U.S. Jews have to get their act together and appreciate what they have in Israel – Before it is too late!”

This entirely accurate statement was described as “antisemitic” and “insulting” by White House Press Secretary Karine Jean-Pierre. But then, Jean-Pierre has been known to smear Jews and supporters of Israel. In 2019, she wrote that “Israel may have committed war crimes,” and that the American Israel Public Affairs Committee uses “severely racist, Islamophobic rhetoric.”

She previously worked for Moveon.org, an organization that supports vicious Jew-haters Linda Sarsour, Rashida Tlaib, and Ilhan Omar, as well as the Boycott, Divestment, and Sanctions movement against Israel. So forgive me if I don’t take her opinions on antisemitism seriously.

Sadly, many American Jews don’t appreciate how important Israel is, both for their own safety and for the Jewish people. President Trump is, in fact, so popular in Israel that, were he eligible to run, he would likely be elected prime minister. Indeed, Israel named a new town after the 45th president, “Trump Heights.”

If saying evangelical Christians support Israel more strongly than American Jews is problematic, furthermore, nobody alerted former Israeli Ambassador to the United States Ron Dermer. Last year, Dermer told an interviewer that “the backbone of Israel’s support in the United States is the evangelical Christians.” A Pew poll during the Trump administration showed that 42% of American Jews thought he favored Israel too much, while only 15% of evangelicals felt that way.

And as the longtime national president of the Zionist Organization of America (ZOA), the leading major American Jewish organization unapologetically defending Israel and the Jewish people, I agree that no U.S. president has done more for Israel than President Trump.

Forging the historic Abraham Accords—which established peace between Israel and Bahrain, the United Arab Emirates, Morocco, and Sudan—would, on its own, have earned any other president the Nobel Peace Prize. But that just grazes the surface of Trump’s myriad pro-Israel and pro-Jewish accomplishments.

Adhering to American law previously ignored by presidents of both political parties, he relocated the U.S. embassy in Israel to the Jewish state’s eternal capital, Jerusalem. He recognized Israel’s sovereignty over the Golan Heights, withdrew the U.S. from President Barack Obama‘s dangerous Iran nuclear deal, signed the Taylor Force Act, and withdrew from the UN’s so-called “Human Rights Council,” so that American tax dollars would not fund murderers, terrorists, and antisemites.

President Trump ended a bigoted and perverse State Department policy that didn’t allow Americans born in Jerusalem to list “Israel” as their birthplace on their passports, and he strengthened Title VI of the Civil Rights Act to protect Jewish students from harassment and discrimination on American university campuses. He recognized the legality of Jewish communities in Judea and Samaria, the biblical heartland of the Jewish people, and he prayed at the holy Western Wall in Jerusalem, becoming the first U.S. president in history to do so.

While today people casually toss around the word “Nazi,” President Trump, after years of U.S. government inaction, deported the last known actual Nazi war criminal in the United States to Germany in order to stand trial.

And still, he did more. If I were on the Nobel committee, I would award President Trump the Peace Prize. On the other hand, since that prize was once awarded to Yasser Arafat, a blood-soaked terrorist, and President Obama, whose nuclear giveaway to Iran undermines the safety of the entire Middle East, that recognition has been devalued.

At the upcoming gala in New York City celebrating ZOA’s 125th anniversary, we will proudly present the Theodor Herzl Gold Medallion to President Trump. It is rarely awarded and has only been bestowed upon such luminaries as Lord Balfour, David Ben-Gurion, President Harry Truman, and British Prime Minister Winston Churchill. That is the type of company befitting President Donald J. Trump, a great friend of Israel and the Jewish people.

Morton A. Klein is national president of the Zionist Organization of America and is widely regarded as one of the leading Jewish activists in the United States.

This op-ed was originally published in Newsweek and can be found here.

We would love to hear from you! Please fill out this form and we will get in touch with you shortly.
Trending Z
News November 2, 2022
ZOA Condemns U.S. State Dept. & U.S. Amb. Nides For Siding with Antisemitic, Discriminatory Palestinian & Hamas Terrorists re: the Temple Mount, Violating Jews’ Religious Freedom
Uncategorized November 2, 2022
FLASH: ISRAEL-JORDAN PEACE TREATY (1994) GUARANTEES JEWS ACCESS TO THE TEMPLE MOUNT – LET MY PEOPLE PRAY
Uncategorized November 2, 2022
ZOA Analysis: Most American Rabbis Who Are Boycotting Some Israeli Ministers Are From Extremist Left Wing Groups (J Street; T’ruah; JVP)
Uncategorized November 2, 2022
Israel’s “Right of Return” Grandparent Clause is De-Judaizing the Jewish State – Eliminate It
Center for Law & Justice
We work to educate the American public and Congress about legal issues in order to advance the interests of Israel and the Jewish people.
We assist American victims of terrorism in vindicating their rights under the law, and seek to hold terrorists and sponsors of terrorism accountable for their actions.
We fight anti-Semitism and anti-Israel bias in the media and on college campuses.
We strive to enforce existing law and also to create new law in order to safeguard the rights of the Jewish people in the United States and Israel.
Our Mission
ZOA STATEMENT
The ZOA speaks out for Israel – in reports, newsletters, and other publications. In speeches in synagogues, churches, and community events, in high schools and colleges from coast to coast. In e-mail action alerts. In op-eds and letters to the editor. In radio and television appearances by ZOA leaders. Always on the front lines of pro-Israel activism, ZOA has made its mark.
Related Articles
OP-ED BY: ZOA ZOA Asks Cardozo Law To Cancel Award To Jimmy Carter