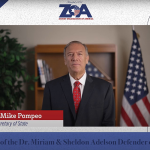 At ZOA Gala Secy Pompeo Gave the Greatest, Most Pro-Israel Speech Ever Delivered by a Public Official

By Joshua Klein (DECEMBER 21, 2021 / BREITBART) Former U.S. Secretary of State Mike Pompeo boasted of the Trump administration’s achievements in the Middle East, including brokering monumental peace accords between Israel and Arab states while bringing Iran “to its knees,” as he condemned antisemitism and claimed standing with Israel is a “means to defend […] 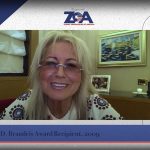 ZOA and Sheldon Were a Natural Match, Like Sheldon, ZOA Stands Up for What It Believes, Even if It Means Standing Alone “Sheldon Would Have Loved to Have Be at ZOA’s Gala By Dmitriy Shapiro (DECEMBER 20, 2021 / JNS) Former U.S. Secretary of State Mike Pompeo drew comparisons between the pro-Israel actions of the […] 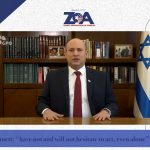 By Dmitriy Shapiro (DECEMBER 20, 2021 / JNS) Israeli Prime Minister Naftali Bennett urged the United States and Europeans to challenge Iran over its violation of nuclear nonproliferation. Speaking at the 2021 virtual gala of the Zionist Organization of America on Sunday, Bennett said that Iran only understands force and that the United States and its allies should take the […] 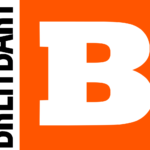 By Joshua Klein (DECEMBER 6, 2021 / BREITBART) Following yet another round of failed nuclear talks between the U.S. and Iran in Vienna this past week, Iranian advocacy group Iranian Americans for Liberty (IAL) released a joint statement with the Zionist Organization of America (ZOA) blasting attempts at “appeasement” and calling to “end the charade […] 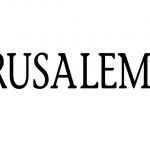 By Dave Schechter (October 12, 2021 / Atlanta Jewish Times) Atlanta attorney David Schoen has been elected chairman of the Zionist Organization of America, a 124-year-old group known for its blunt — and unapologetic — support of Israel. Schoen, 62, will serve a three-year term guiding the organization on whose board he has served for […] 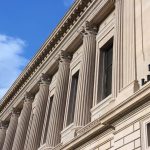 By Dmitriy Shapiro (AUGUST 30, 2021 / JNS) A public library system in Philadelphia is promising to make operational changes after drawing criticism for what some community members are considering an effort to indoctrinate children and parents against Israel through books, videos and resource links that show a biased pro-Palestinian agenda. The issues were first discovered by members […]