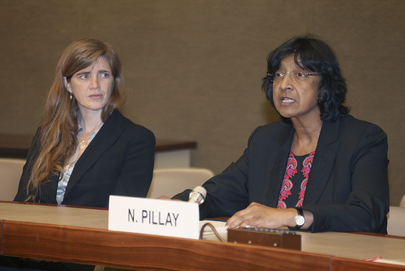 The Zionist Organization of America (ZOA) has warned that the appointment of Samantha Power as U.S. Ambassador to the United Nations could well have serious consequences for the U.S. and Israel. The ZOA says this, not only in reference to her disturbing record of anti-Israel and anti-U.S. statements and views which we detailed in two press releases earlier this week, but with regard to her close association with and advocacy for the Israel-hating billionaire George Soros-funded ‘Responsibility to Protect’ (R2P) initiative.

R2P is an idea pioneered in recent years to overcome objections to violating state sovereignty for the purpose of enabling humanitarian military intervention to protect innocent civilians. While obviously an appealing idea, the ZOA is concerned that this doctrine, like so many other international norms designed to protect innocents who are being killed, will be used chiefly against democracies and specifically against Israel. R2P could be used to stop legitimate Israeli self-defense military action against terrorists in the Fatah/Palestinian Authority (PA) and in Hamas-controlled Gaza, since Israeli self-defense action could inadvertently and unintentionally kill innocent civilians, as happens in every war. Furthermore, in these territories, anti-Israel terrorists regularly commit the war crime of embedding themselves among civilians, ensuring even greater civilian casualties in resultant Israeli self-defense operations. The ZOA is also concerned that, should Israel decide to launch self-defensive military action against Syria, Lebanon or Iran, R2P could be invoked by one or more countries to give a patina of legitimacy to condemn legitimate, necessary Israeli self-defensive measures.

ZOA National President Morton A. Klein said, “The ‘Responsibility to Protect’ idea would hardly be the first example of an international norm or initiative, developed for the purpose of helping innocents, that is then used to harm democracies and especially Israel.

“We know, for example, that the International Criminal Court, formed in 1998 to prosecute war crimes, has served as a proponent of the absurd idea that Jews living or moving into homes in Judea and Samaria are committing a war crime.

“The ICC hasn’t stopped genuine war crimes, like the mass slaughter of innocents, from occurring – but there has been a major international campaign to criminalize Jewish residence in Judea/Samaria from which the Boycott, Sanctions, Divestment (BDS) campaign has drawn sustenance. The R2P may well also be used in this way. We also know that Samantha Power is an ICC enthusiast and was strongly critical of the Bush Administration’s refusal to accede to the ICC’s jurisdiction. In 2004 she said explicitly that “we should be working through the ICC.”

“We don’t have to make guesses about this. Richard Falk, for example, the anti-Semitic conspiracy theorist who also serves as ‘UN Special Rapporteur on the Situation of Human Rights in the Palestinian Territories Occupied Since 1967,’ has explicitly said that R2P should be used against Israel.

“George Soros, the anti-Israel billionaire who helped found and also funds the organization, J Street, in order to weaken the voice of American Jewry by making this ostensible pro-Israel body  a public critic of Israel, has also provided funds for pushing and disseminating the R2P idea.

“Consider: Which one of the world’s trouble spots earns out-sized attention and television coverage? Not Tibet or Nigeria or Sudan or even Syria, despite the two-year old raging civil war in that country that has claimed over one hundred thousand lives. The trouble spots that attract politically the fiercest and most widely disseminated statements, demonstrations and the most UN resolutions are the Palestinian-controlled territories in the West Bank and Gaza.

“Samantha Power’s nomination by President Obama is looking worse the longer one looks at it.”

“It is not as if Samantha Power has said or done anything to indicate that she does not believe in using R2P with reference to Israel. For the last past year, she has headed President Obama’s Atrocities Prevention Board (APB) – an organization that appears to have no office, infrastructure or record by which to judge its approach and effectiveness. She has also spent four years heading the White House’s Office of Multilateral Affairs and Human Rights. During this time, civilian slaughter in Sudan and Syria has continued, suggesting R2P is not serving as any kind of mechanism to stop genuine massacres and human rights abuses. But it could well be to attempt to thwart legitimate Israeli self-defense needs and Samantha Power has been a strong proponent of R2P.

“One must also bear in mind that pro-Palestinian radical groups seek to delegitimize Israel by claiming it commits genocide and other human rights abuses. In these efforts they seek to use government and international mechanisms to harm Israel.

“R2P has gained momentum internationally. Support for it by the U.S. and by its U.S. Cabinet-level U.N. representative will significantly help it along. In these circumstances, does anyone actually believe that the ‘Responsibility to Protect’ will be invoked against Russia in Chechnya or China in Tibet or Assad in Syria or the equally barbarous Sunni terrorists who might eventually displace him? Or will it be invoked against Israel? And if it is invoked against Israeli self-defense needs, what will be the position of the Obama Administration, which will have done so much to further it through its appointment of Samantha Power?

“Samantha Power’s nomination by President Obama is looking worse the longer one looks at it.”

We would love to hear from you! Please fill out this form and we will get in touch with you shortly.
Trending Z
Uncategorized June 10, 2013
FLASH: ISRAEL-JORDAN PEACE TREATY (1994) GUARANTEES JEWS ACCESS TO THE TEMPLE MOUNT – LET MY PEOPLE PRAY
Uncategorized June 10, 2013
ZOA Analysis: Most American Rabbis Who Are Boycotting Some Israeli Ministers Are From Extremist Left Wing Groups (J Street; T’ruah; JVP)
Uncategorized June 10, 2013
Israel’s “Right of Return” Grandparent Clause is De-Judaizing the Jewish State – Eliminate It
Uncategorized June 10, 2013
Exclusive: ZOA Accuses Ilhan Omar of Hating the U.S. ‘as Much as Israel,’ Lauds Kevin McCarthy for ‘Throwing Her Off the HFAC’
Center for Law & Justice
We work to educate the American public and Congress about legal issues in order to advance the interests of Israel and the Jewish people.
We assist American victims of terrorism in vindicating their rights under the law, and seek to hold terrorists and sponsors of terrorism accountable for their actions.
We fight anti-Semitism and anti-Israel bias in the media and on college campuses.
We strive to enforce existing law and also to create new law in order to safeguard the rights of the Jewish people in the United States and Israel.
Our Mission
ZOA STATEMENT
The ZOA speaks out for Israel – in reports, newsletters, and other publications. In speeches in synagogues, churches, and community events, in high schools and colleges from coast to coast. In e-mail action alerts. In op-eds and letters to the editor. In radio and television appearances by ZOA leaders. Always on the front lines of pro-Israel activism, ZOA has made its mark.
Related Articles
OP-ED BY: Morton A. Klein, ZOA More Reasons To Oppose Obama’s Nomination of Samantha Power As U.N. Ambassador