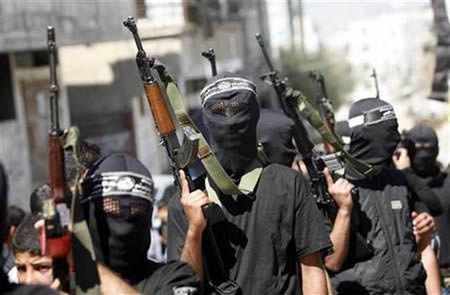 The Al Aqsa Martyrs Brigade, a U.S.- and European-designated terrorist group and armed wing of Mahmoud Abbas’ Fatah, the dominant party controlling the Palestinian Authority (PA), has threatened to kidnap Israeli soldiers in order to extort the release by Israel of convicted and jailed Palestinian terrorists in Israel.

On Fatah’s Facebook page as well as in a video released on Youtube, a masked terrorist declares, “The Al-Aqsa Martyrs Brigades … Praise Allah, our Jihad fighters have managed to develop these rockets so they will reach the Zionist depth [Israel], Allah willing, to a distance of 45 km. inside the occupied Palestinian territories. We will strike the Zionist enemy [Israel] on its own ground … Yes, we in the Al-Aqsa Brigades are preparing to kidnap Zionist soldiers to settle accounts with the Zionist enemy properly, to empty out the Zionist prisons …With these rockets we will liberate our Jerusalem. With these rockets we will crush the Zionist enemy in sensitive areas where it didn’t expect us to crush it, Allah willing” (Facebook, ‘Fatah – The Main Page,’ November 17, 2013; Al-Aqsa Brigades YouTube channel, November 16, 2013, translation in ‘Fatah publicizes threats to kidnap, kill and bomb Israelis,’ Palestinian Media watch (PMW) bulletin, November 25, 2013).

The ZOA has long argued that freeing jailed Palestinian terrorists in exchange for kidnapped Israelis rewards terrorists; allows terrorists to go undeterred at the prospect of long prison sentences when experience confirms that they have good chance of being released early; boosts the standing and morale of the most extreme Palestinian terrorist groups, and will result in the murder of additional Israelis by terrorists freed under such deals, as many studies have shown.

Moreover, as we see here in the boast the Fatah terrorist, a policy of freeing terrorists in return for kidnapped Israelis only encourages further kidnapping of Israelis by terrorist groups hoping to secure by these means the release of further jailed terrorists. Such a policy needlessly endangers the lives of any Israeli serviceman within reach of Pa terror groups. It is also noteworthy, though hardly new, that the Fatah terrorist speaks of the “occupied Palestinian territories” in reference to all of Israel; affording further evidence, if any was needed, at the Fatah/PA’s fundamental rejection of Israel’s existence as a sovereign Jewish state.

We would love to hear from you! Please fill out this form and we will get in touch with you shortly.
Trending Z
News December 23, 2013
ZOA Condemns U.S. State Dept. & U.S. Amb. Nides For Siding with Antisemitic, Discriminatory Palestinian & Hamas Terrorists re: the Temple Mount, Violating Jews’ Religious Freedom
Uncategorized December 23, 2013
FLASH: ISRAEL-JORDAN PEACE TREATY (1994) GUARANTEES JEWS ACCESS TO THE TEMPLE MOUNT – LET MY PEOPLE PRAY
Uncategorized December 23, 2013
ZOA Analysis: Most American Rabbis Who Are Boycotting Some Israeli Ministers Are From Extremist Left Wing Groups (J Street; T’ruah; JVP)
Uncategorized December 23, 2013
Israel’s “Right of Return” Grandparent Clause is De-Judaizing the Jewish State – Eliminate It
Center for Law & Justice
We work to educate the American public and Congress about legal issues in order to advance the interests of Israel and the Jewish people.
We assist American victims of terrorism in vindicating their rights under the law, and seek to hold terrorists and sponsors of terrorism accountable for their actions.
We fight anti-Semitism and anti-Israel bias in the media and on college campuses.
We strive to enforce existing law and also to create new law in order to safeguard the rights of the Jewish people in the United States and Israel.
Our Mission
ZOA STATEMENT
The ZOA speaks out for Israel – in reports, newsletters, and other publications. In speeches in synagogues, churches, and community events, in high schools and colleges from coast to coast. In e-mail action alerts. In op-eds and letters to the editor. In radio and television appearances by ZOA leaders. Always on the front lines of pro-Israel activism, ZOA has made its mark.
Related Articles
OP-ED BY: ZOA ZOA Condemns Physicist Stephen Hawking Boycott of Israel