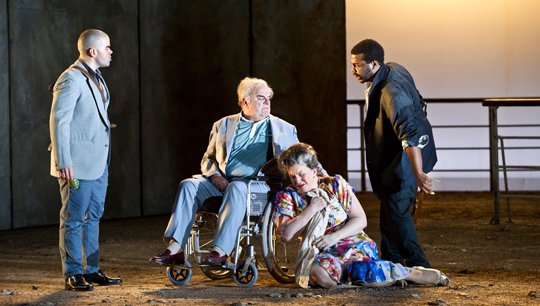 The Zionist Organization of America (ZOA) welcomes the Metropolitan Opera and AMC Theaters decision canceling the planned live HD transmission of the anti-Semitic, anti-Israel Opera “Death of Klinghoffer” to 2,000 theaters in 66 countries around the world.  But it is distressing that the Metropolitan Opera has still not canceled the eight live performances of “Death of Klinghoffer” in New York City this fall, commencing on October 20.  This must be done as soon as possible.

As ZOA’s press release last week explained, “Death of Klinghoffer” revises history to malign Israel, in an attempt to justify and “humanize” the Palestinian terrorists who hijacked the Achille Lauro cruise ship in 1985 and murdered an innocent disabled Jewish-American passenger named Leon Klinghoffer in cold blood.

ZOA is especially grateful for and appreciative of the sensitivity and prompt actions of AMC Theaters.  As part of ZOA’s campaign against “Death of Klinghoffer,” ZOA contacted AMC, which owns the theaters throughout the United States where “Klinghoffer” was scheduled for broadcast.  AMC is headquartered in Kansas – a state which recently experienced the horrible results of inciting anti-Semitism; this past April, a gunman  murdered three innocent people at a Jewish center and Jewish retirement home.  As soon as ZOA described to AMC how “Death of Klinghoffer” falsely revises history to malign Jews, and employs other vicious anti-Semitic canards, AMC immediately understood the anti-Semitic nature and perils of “Death of Klinghoffer” and took action, including contacting and conferring with officials at the Met Opera.  AMC kindly called ZOA afterwards to tell us of their actions, and we were able to express our appreciation to the company in person.

“In this era when too many excuse hatred against Jews and Israel, it was gratifying to find a company which understood the anti-Semitic nature of this opera, and immediately took action.”

ZOA  is also grateful to many others who have joined our efforts to stop performances and broadcasts of “Death of Klinghoffer.”  ZOA contacted large donors to the Met, and friends of these donors, who have been helping with ZOA’s efforts.  ZOA’s press release last week also provided information for writing to the Met’s General Manager Peter Gelb and contacting opera board members.  We are very gratified that so many members of the public wrote and called Mr. Gelb and did and are doing everything they can to help. ZOA would also like to especially thank Myron Kaplan, an avid opera-goer and Camera senior analyst, who played the important role of first raising the issue of this anti-Semitic opera, in Mr. Kaplan’s open letter to Met Opera General Manager Peter Gelb.

Unfortunately, however, as of now, the Met plans to perform the opera 8 times in New York.  ZOA urges the public to continue joining our continuing efforts to stop these shameful performances.   If you did not see our press release last week, please click here to see Met General Manager Peter Gelb’s address and other helpful information.  Please also contact liz@zoa.org if you would like to assist with our planned protests at the Met this fall if the Met insists on performing an opera which justifies the murder of innocent Jews.

“We welcome the Metropolitan Opera canceling the simulcast of the anti-Israel, anti-Semitic opera “Death of Klinghoffer.”  But the Met must also cancel the live New York performances of this bigoted play, filled with breath-taking propaganda lies against Israel and the Jewish people.  This play legitimizes, romanticizes and humanizes Arab terrorist killers of Jews.

In this opera, an Arab killer says “We are soldiers fighting a war; we are not criminals; we are not vandals;  we are men of ideals” – while the Jews are portrayed as fat, cheaters, exploiters, defilers, defamers and polluters.  While the opera complains about the Arab “refugees” of the 1948 war, the opera never mentions the Arab’s refusal to accept the state offered to them in 1948, which would have prevented the “refugee” issue.  Moreover, if seven Arab countries had not invaded Israel in 1948 in an attempt to destroy the fledging Jewish state and murder its Jewish citizens, and if the Arab leaders had not told Arabs to leave so that the invading Arab armies could more easily murder Jews, there would have been no refugee issue.”

While we are pleased that there now will be far less exposure for “Death of Klinghoffer,” our job is not complete until there are no performances of this anti-Semitic opera.

We would love to hear from you! Please fill out this form and we will get in touch with you shortly.
Trending Z
News June 18, 2014
ZOA Condemns U.S. State Dept. & U.S. Amb. Nides For Siding with Antisemitic, Discriminatory Palestinian & Hamas Terrorists re: the Temple Mount, Violating Jews’ Religious Freedom
Uncategorized June 18, 2014
FLASH: ISRAEL-JORDAN PEACE TREATY (1994) GUARANTEES JEWS ACCESS TO THE TEMPLE MOUNT – LET MY PEOPLE PRAY
Uncategorized June 18, 2014
ZOA Analysis: Most American Rabbis Who Are Boycotting Some Israeli Ministers Are From Extremist Left Wing Groups (J Street; T’ruah; JVP)
Uncategorized June 18, 2014
Israel’s “Right of Return” Grandparent Clause is De-Judaizing the Jewish State – Eliminate It
Center for Law & Justice
We work to educate the American public and Congress about legal issues in order to advance the interests of Israel and the Jewish people.
We assist American victims of terrorism in vindicating their rights under the law, and seek to hold terrorists and sponsors of terrorism accountable for their actions.
We fight anti-Semitism and anti-Israel bias in the media and on college campuses.
We strive to enforce existing law and also to create new law in order to safeguard the rights of the Jewish people in the United States and Israel.
Our Mission
ZOA STATEMENT
The ZOA speaks out for Israel – in reports, newsletters, and other publications. In speeches in synagogues, churches, and community events, in high schools and colleges from coast to coast. In e-mail action alerts. In op-eds and letters to the editor. In radio and television appearances by ZOA leaders. Always on the front lines of pro-Israel activism, ZOA has made its mark.
Related Articles
OP-ED ZOA Criticizes Obama For Supplying F-16s to Egypt’s Anti-Semitic Morsi & His Extremist Islamist Regime