ZOA Blasts Nike Over ‘Anti-Semitic’ Video
ZOA in the news

A screenshot from the Nike ad depicting evil soccer players

The Zionist Organization of America (ZOA) has called out Nike for an animated promotional video posted online before the World Cup in Brazil, urging leaders of the shoe and sports paraphernalia company to have the ad removed because its content is anti-Semitic.

In the video, titled “The Last Game,” animated international soccer stars compete against evil clones who wear uniforms bearing a logo that looks like the Jewish Star of David. Additionally, the background of the video includes images of a white rectangle with the same Star-of-David-like image in the center — resembling the Israeli flag, but without the blue stripes. 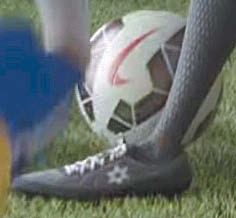 An evil soccer player trips a hero. What looks like a Jewish star is seen on the offender’s shoe.

The offensive image, when magnified, is actually a highly unusual hexagonal-designed soccer ball that looks like a Jewish star to the naked eye. Soccer balls commonly have a pentagonal pattern, which does not resemble a Jewish star. The video contains numerous subliminal images of the Jewish star with evil connotations, including an evil player with a “Jewish star” on his shoe tripping a good guy.

“Some of the animated soccer stars in the video — i.e., the ‘good guys’ — are wearing shirts with a ‘Fly Emirates’ logo and a ‘Qatar Airways’ logo, which must mean that these Arab airlines co-sponsored the video. It is no secret that the United Arab Emirates and Qatar have a deeply troubling history of anti-Semitism and hostility to Israel,” ZOA leaders wrote in a letter to Nike Chairman Philip H. Knight and President and CEO Mark Parker in Beaverton, Ore.

Nike has dismissed accusations that the video is anti-Semitic, despite complaints from ZOA, the Israeli Knesset, the World Zionist Organization and general viewers. The company claims that the controversial logos in the ad were intended to represent a soccer ball.

The insignia of the evil soccer team on a stadium giant TV screen resembles a Jewish star.

The video can be viewed at www.youtube.com/watch?v=Iy1rumvo9xc The ZOA urges concerned people to write the Nike chairman and president/CEO at Nike World Headquarters, 1 Bowerman Drive, Beaverton, OR 97005.

We would love to hear from you! Please fill out this form and we will get in touch with you shortly.
Trending Z
Uncategorized July 17, 2014
ZOA Analysis: Most American Rabbis Who Are Boycotting Some Israeli Ministers Are From Extremist Left Wing Groups (J Street; T’ruah; JVP)
News July 17, 2014
ZOA is Disappointed, Offended and Frightened by 211 U.S. House Votes Supporting Jew-Hating, Israel-Hating Rep. Ilhan Omar
Uncategorized July 17, 2014
ZOA: Israel’s Reasonable Judicial Reform Proposals Are Good for Democracy, the Rule of Law and the Economy
Uncategorized July 17, 2014
Israel’s “Right of Return” Grandparent Clause is De-Judaizing the Jewish State – Eliminate It
Center for Law & Justice
We work to educate the American public and Congress about legal issues in order to advance the interests of Israel and the Jewish people.
We assist American victims of terrorism in vindicating their rights under the law, and seek to hold terrorists and sponsors of terrorism accountable for their actions.
We fight anti-Semitism and anti-Israel bias in the media and on college campuses.
We strive to enforce existing law and also to create new law in order to safeguard the rights of the Jewish people in the United States and Israel.
Our Mission
ZOA STATEMENT
The ZOA speaks out for Israel – in reports, newsletters, and other publications. In speeches in synagogues, churches, and community events, in high schools and colleges from coast to coast. In e-mail action alerts. In op-eds and letters to the editor. In radio and television appearances by ZOA leaders. Always on the front lines of pro-Israel activism, ZOA has made its mark.
Connect with us
Sign up for our Newsletter