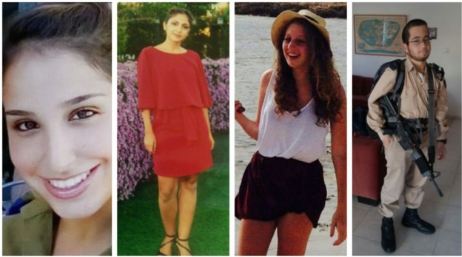 The Zionist Organization of America (ZOA) is appalled and horrified by the conduct of Nerdeen Kiswani, president of the New York City chapter of the so-called “Students for Justice in Palestine” (SJP) group, who publicly praised an Arab terrorist’s truck-ramming attack in Jerusalem on January 8, 2017, which killed four Israeli soldiers (two of whom were American citizens) and wounded 17 others.  The terrorist, who lived in eastern Jerusalem, drove into a group of soldiers who were on an educational trip, and then reversed and drove back over the bodies after he hit them to ensure their deaths.  In a Facebook post – which she reportedly later deleted – Kiswani chastised those who condemned this murderous terror attack, claiming “no apology [for the attack was] needed.”  Instead, Kiswani publicly praised Palestinian Arabs who rejoiced over the attack and gave out sweets to celebrate it, describing their actions as “the biggest ‘F you’” to “settlers.”

Even though Kiswani removed the Facebook post, her Twitter feed reportedly still includes comments supporting the terrorist attack and violence against Israeli soldiers, whom she described as “a legitimate target.”  Kiswani has a history of calling for violence against Jews and for Israel’s destruction.  She reportedly “tweeted” a list of chants for activists to use at rallies, including, “There is only one solution/Intifada Revolution” and “We don’t want no two state/We want 48 – plainly a reference to 1948, the year that Israel declared its independence after which five Arab armies (Egypt, Syria, Transjordan, Lebanon and Iraq) immediately invaded Israel with the goal of destroying the Jewish State.

Kiswani publicly praised Palestinian Arabs who rejoiced over the attack and gave out sweets to celebrate it, describing their actions as “the biggest ‘F you’” to “settlers.”

Kiswani’s monstrous and immoral hatred expressed against the Jewish State of Israel is emblematic of the anti-Semitism and vicious anti-Israelism that her group, SJP, has been promoting at the City University of New York (CUNY).  Last February, the ZOA wrote to CUNY’s Chancellor and Board of Trustees where Kiswani’s SJP chapter operates, describing in detail the hostile environment that SJP was creating for many Jewish students on four CUNY campuses, based on the group’s hateful, divisive and anti-Semitic conduct. The ZOA’s letter triggered an independent investigation of anti-Semitism at CUNY by two outside attorneys.  The months-long investigation confirmed numerous anti-Semitic incidents at CUNY, including many perpetrated by SJP.

In addition to the independent investigation triggered by the ZOA’s letter, the Chancellor committed to convening a CUNY-wide working group to assess the climate on CUNY campuses and make recommendations to ensure that CUNY is an inclusive, welcoming and respectful educational environment, free from discrimination.  To date, CUNY has not publicly revealed any recommendations of the working group or even any of the group’s activities.

ZOA National President Morton A. Klein urged the CUNY leadership to remain vigilant against the hatred and prejudice promoted by Nerdeen Kiswani and her group, the New York City chapter of SJP:  “Nerdeen Kiswani’s postings on social media show us that strong and constructive recommendations from the Chancellor’s working group are critical, and that the steps the ZOA urged CUNY’s leadership to take last February are more necessary than ever.  CUNY’s leadership must speak out publicly against the hateful, anti-Semitic and violence-inciting actions of SJP and its leaders.  In addition, SJP should be investigated for violating CUNY rules and policies, and punished if the investigation reveals that rules and policies have been violated.  Finally, CUNY should investigate SJP and its leaders for any ties to terrorists and terrorist activities.”

We would love to hear from you! Please fill out this form and we will get in touch with you shortly.
Trending Z
Uncategorized January 18, 2017
ZOA Analysis: Most American Rabbis Who Are Boycotting Some Israeli Ministers Are From Extremist Left Wing Groups (J Street; T’ruah; JVP)
Uncategorized January 18, 2017
ZOA: Israel’s Reasonable Judicial Reform Proposals Are Good for Democracy, the Rule of Law and the Economy
News January 18, 2017
ZOA is Disappointed, Offended and Frightened by 211 U.S. House Votes Supporting Jew-Hating, Israel-Hating Rep. Ilhan Omar
Uncategorized January 18, 2017
Israel’s “Right of Return” Grandparent Clause is De-Judaizing the Jewish State – Eliminate It
Center for Law & Justice
We work to educate the American public and Congress about legal issues in order to advance the interests of Israel and the Jewish people.
We assist American victims of terrorism in vindicating their rights under the law, and seek to hold terrorists and sponsors of terrorism accountable for their actions.
We fight anti-Semitism and anti-Israel bias in the media and on college campuses.
We strive to enforce existing law and also to create new law in order to safeguard the rights of the Jewish people in the United States and Israel.
Our Mission
ZOA STATEMENT
The ZOA speaks out for Israel – in reports, newsletters, and other publications. In speeches in synagogues, churches, and community events, in high schools and colleges from coast to coast. In e-mail action alerts. In op-eds and letters to the editor. In radio and television appearances by ZOA leaders. Always on the front lines of pro-Israel activism, ZOA has made its mark.
Related Articles
OP-ED BY: ZOA Staff P.A.’s Abbas Confers Highest Award On Terrorist Leader Al-Wazir, Calling Him “Martyr,” “Model Of a True Fighter”