President Donald Trump could have expressed his deep concerns about extremist anti-American, antisemitic, Israelophobic Reps. Ilhan Omar (D-MN), Rashida Tlaib (D-MI), and Alexandria Ocasio-Cortez (D-NY) in a more appropriate way by using a less controversial phrase. Still, we understand his frustrations with these extremists that led to his using an inappropriate phrase.

The vicious attacks on President Trump this week, including the Democrats’ party-line House resolution condemning the president’s calling out of these haters, are an intentional distraction from the real problem, which the House of Representatives still refuses to properly address: the repeated, appalling, antisemitic, Israelophobic, bigoted, hateful, anti-American statements and actions of these rookie members of Congress.

President Trump is understandably and appropriately disgusted with thems.  I am, too.  President Trump’s comments had nothing to do with those members’ gender or skin color. He would undoubtedly have strongly condemned white male Congress members if they had repeatedly made such ugly comments against America and its closest ally, the Jewish State of Israel, and the Jewish people.

As Congresswoman Liz Cheney (R-WY) summed it up, “our opposition to our socialist colleagues has absolutely nothing to do with their gender, with their religion or with their race; it has to do with the content of their policies. . . . They’re wrong when they espouse and enable, and their leadership refuses to condemn, vile anti-Semitism. They’re wrong when they rush to blame America first, when they fail to recognize that this is the greatest nation that has ever existed, the exceptional nation.”

In a rational world, vicious America-hating and Jew-hating members of Congress would be booted out of Congress, or at the very least, be removed from their powerful committee posts. These haters would be soundly condemned by the House of Representatives, and by all decent people.

And in a rational world, President Donald Trump would be praised to the skies for calling out those hate-filled Congress members, after a cowardly House of Representatives refused to do so.  The president would also be sincerely appreciated for his tremendous achievements, for making Americans safer and more prosperous, and for keeping his promises to treat our ally Israel as the valuable ally that she is, instead of like a second-class citizen, as the previous administration did.

But we are living in an upside down world, in which vicious haters go scot-free and our courageous president, who calls out the haters, is falsely condemned as a “racist.”

Let’s look at the facts.

Ilhan Omar also laughed, laughed (!) about Al Qaeda, Hezbollah and al Shabaab terrorists; complained that Americans say the names “Al Qaeda,” “Al Shabaab” and “Hezbollah” as if those names were a bad thing (apparently, in Omar’s book, it’s not a bad thing that these designated terror groups murdered thousands of Americans); blamed U.S. “involvement in other people’s affairs” for terrorism; refused to answer whether she supports Al Qaeda; and dismissively called the Islamic terrorists who murdered 3,000 Americans on 9/11 “some people who did something.”

Omar repeatedly expresses her vicious hatred of Jews and Israel.  She promotes the anti-Israel, antisemitic, discriminatory boycott, divestment and sanctions (BDS) movement, after lying about her BDS position while running for Congress. She has made false antisemitic claims that Jewish money buys Congress; condemned supporters of Israel; defamed Israel as guilty of “evil doings” after Hamas lobbed massive numbers of rockets into Israel; hurled antisemitic accusations that Israel “hypnotized” the world; falsely maligned the democratic state of Israel as an “apartheid Israeli regime”; and abused her position on the House Foreign Affairs Committee to rudely lambaste the Jewish U.S. envoy on Venezuela, Elliott Abrams, without giving him an opportunity to respond.

Omar is again demonstrating her bigoted, unbridled hatred of the Jewish people by introducing a congressional resolution to promote anti-Jewish, anti-Israel boycotts.

Not surprisingly, while falsely claiming that support for Israel is based on “the Benjamins,” the hypocritical Omar is financially backed by the worst anti-American and anti-Israel propagandists and PACs.

Yet despite Ilhan Omar’s long horrific record, the branch of Congress where Omar sits does nothing.

Rashida Tlaib wrapped herself in the Palestinian flag to celebrate her primary election victory; posed for a photo with a well-known Hezbollah terrorist group supporter after her official swearing-in ceremony (despite the fact that Hezbollah is responsible for the death of hundreds of Americans); closely associates with a long list of terrorists and vicious antisemites; said that the Holocaust gives her a “calming feeling”; falsely calls Israel a “racist country” despite Israel’s enormous racial diversity and Israel’s daring rescues of huge numbers of black Ethiopian Jews and other dark-skinned Jews to live in freedom in Israel; supports antisemitic BDS and the destruction of Israel in favor of an Arab-dominated state; absurdly claimed Dr. Martin Luther King Jr. inspired her views when in fact King was an outspoken supporter of Israel; and placed a post-it with the word “Palestine” over Israel on her Congressional map, to indicate her support for eliminating the Jewish state and replacing Israel with a 23rd Arab state.

And the branch of Congress where Tlaib sits does nothing.

Alexandria Ocasio-Cortez (AOC) maligned the United States and defiled the memory of the six million Jews murdered in the Holocaust, all in one stroke, by falsely claiming that the detention centers for illegal migrants are “concentration camps.” AOC is a member of the Democratic Socialists of America – which supports antisemitic BDS. AOC refused to condemn BDS or join other freshman Congress members in a visit to Israel.  AOC falsely and maliciously accused Israel of committing a “massacre” against Gaza “protesters” when in fact the Palestinian-Arabs concerned were murderous rioters attempting to enter Israel to murder Jews, and when even Hamas and Palestinian Islamic Jihad admitted that that most of the rioters were these terror groups’ members. And AOC’s chief-of-staff wears a T-shirt depicting a Nazi collaborator.

And the branch of Congress where AOC sits does nothing.

Instead, the left wrongly condemns Trump as a “racist” for calling out congresswomen who should be called out.  Former Democratic New York State Assemblyman Dov Hikind tweeted a wonderful cartoon that says the same: 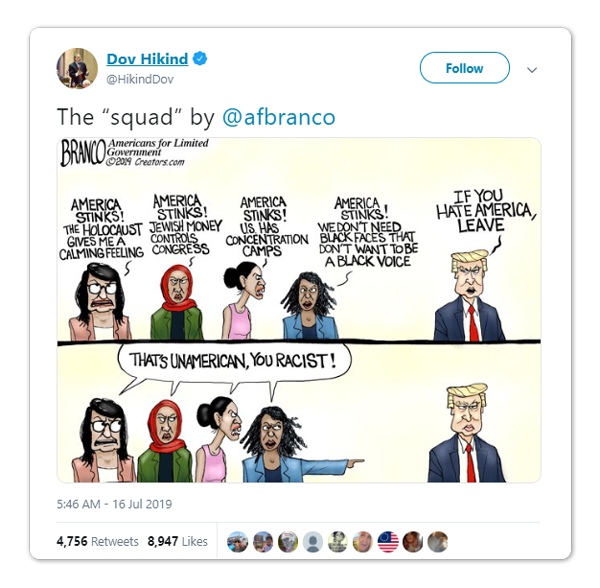 We are in deep trouble if calling out vicious hatred of the Jewish state and people subjects someone to such ludicrous accusations.

As a Jew and child of Holocaust survivors, and president of the Zionist Organization of America, I am deeply grateful to President Trump for calling out the haters of America, Israel, and the American and Jewish people.

It’s not racist to call out America-haters and Jew-haters.

I am also saddened by and ashamed of those leftwing Jews who joined the senseless condemnation of President Trump for the “crime” of standing up for the American people and the Jewish people. Those ungrateful critics don’t represent me.

Fortunately, there are many Jews who are still rational and clear-thinking and appreciate all of the president’s achievements.

Calling the president “racist” is a distraction from the real issue of Omar and her colleagues’ hatefulness.  It is time for everyone to demand that Speaker Pelosi should remove extreme, antisemitic, America-hating members from their committees.

The original article was posted at Breitbart.com and can be found here.

We would love to hear from you! Please fill out this form and we will get in touch with you shortly.
Trending Z
News July 23, 2019
ZOA Deplores that Pres. Trump Dined with Jew-Haters Kanye West & Nick Fuentes, and Demands he Condemn Them
Uncategorized July 23, 2019
ZOA Honors Trump With Rarely Given Herzl Award for His Great Pro-Israel Work – Joins Ranks of Balfour, Truman, Begin, Meir, Ben-Gurion
News July 23, 2019
ZOA Responds to Questions About Pres. Trump, Kanye West, Fuentes, etc. Issue
Uncategorized July 23, 2019
Zionist Organization of America Honors Donald Trump for Support for Israel, Jewish Community
Center for Law & Justice
We work to educate the American public and Congress about legal issues in order to advance the interests of Israel and the Jewish people.
We assist American victims of terrorism in vindicating their rights under the law, and seek to hold terrorists and sponsors of terrorism accountable for their actions.
We fight anti-Semitism and anti-Israel bias in the media and on college campuses.
We strive to enforce existing law and also to create new law in order to safeguard the rights of the Jewish people in the United States and Israel.
Our Mission
ZOA STATEMENT
The ZOA speaks out for Israel – in reports, newsletters, and other publications. In speeches in synagogues, churches, and community events, in high schools and colleges from coast to coast. In e-mail action alerts. In op-eds and letters to the editor. In radio and television appearances by ZOA leaders. Always on the front lines of pro-Israel activism, ZOA has made its mark.
Related Articles
OP-ED BY: Morton A. Klein ZOA: Poof, the magic settlements!