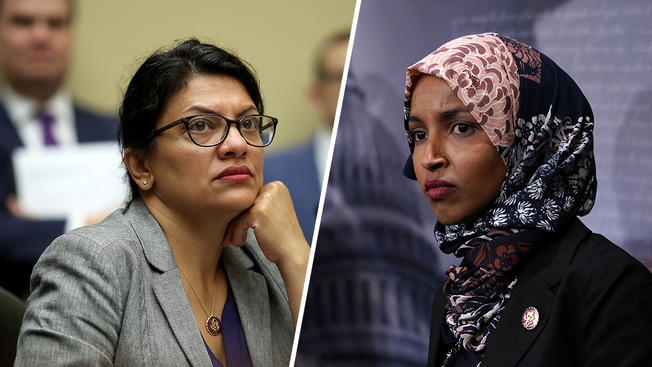 Tlaib/Omar repeatedly falsely claimed that Israel occupies “Palestinian land” and demanded an “end to occupation” – their Orwellian method of calling for Israel’s destruction.  In fact, Israel is not an “occupier” because Israel, Judea/Samaria (a/k/a the West Bank) and Jerusalem are all lands designated for the Jewish homeland, both historically and under binding international law.  There has never been a state of “Palestine,” ever. The only way one can be an “occupier” is to occupy another nation’s sovereign land.  Israel is not, and cannot be an “occupier” of her own land. Additionally, the Palestinians rejected a state 4 times in the last 19 years on virtually all the disputed lands—because it required them accepting Israel as a Jewish State and agreeing to no further claims.

By contrast, Arab “Palestinians” are not indigenous to Israel. Most immigrated into Israel from Arab nations (Egypt, Syria, etc.) and from northern Africa (Algeria, etc.) after waves of Jewish communities started rebuilding Israel in the mid-to-late 1800s through mid-1900s. “Palestinian” Arab last names reveal their origin in Egypt, North Africa and elsewhere.

International legally binding treaties, including the San Remo Resolution, the Anglo- American Treaty (a U.S. treaty obligation), Feisal-Weitzman Treaty, and League of Nations Mandate to Britain, designated Israel, Jerusalem and Judea/Samaria for the Jewish homeland. Israel is not an “occupier” because these areas are no other nation’s sovereign land.

Tlaib/Omar misleadingly implied they were excluded from the bipartisan Congressional trip to Israel a few weeks ago, and misleadingly failed to mention that Tlaib rejected the humanitarian visit to her grandmother, approved by Israel, that Tlaib requested: In fact, Omar and Tlaib were invited to the bipartisan trip to Israel, attended by 70 of their colleagues, but refused to attend.  Instead, Tlaib/Omar demanded an anti-Israel trip to non-existent “Palestine,” which did not include meetings with Israeli officials, to promote hatred and boycotts against Israel. And despite the fact that Israel approved Tlaib’s request for a humanitarian visit to her grandmother, Tlaib rejected the very trip opportunity that she requested. In other words, Tlaib/Omar were given plenty of opportunities to see the “reality on the ground” – but instead chose to propagandize against Israel and promote anti-Israel boycotts and Israel’s destruction.

Tlaib/Omar falsely claimed that they were prevented from doing their jobs: In fact, neither Tlaib nor Omar is on the Middle East subcommittee, and thus have no direct role regarding these issues. Tlaib and Omar’s real job is to serve their Congressional districts in Minnesota and Michigan, instead of abusing their positions to bash and spread falsehoods about Jews and Israel. Further, as ZOA has previously explained, Omar and Tlaib should be removed from their committee assignments due to their repeated despicable expressions of Jew-hatred, Holocaust revisionism and bias, and associations with and funding by terror and leading anti-Israel BDS promoters.

Tlaib/Omar falsely and outrageously compared Israel to apartheid South Africa – while calling for discrimination against Jews: Israel has absolutely no comparison to apartheid South Africa. Israeli-Arabs are full Israeli citizens, Supreme Court judges, and members of the Israeli Knesset (parliament). Israeli Arabs vote in Israel’s elections, serve side-by-side with Jews in every occupation, etc. That’s the opposite of “apartheid.”

Tlaib/Omar falsely called checkpoints and security checks “dehumanizing” “harassment” of Palestinians, when the sole purpose of these is to stop Palestinian-Arab terror attacks: Checkpoints are a part of life throughout the world, to stop terror. Virtually every American airport and major office building has security checks. Similarly, Israel’s checkpoints exist solely to stop Palestinian-Arab terror attacks. Since the Intifadas began, over 12,000 innocent Israelis and many Americans were murdered or maimed by Palestinian-Arab terrorists who blew up pizza parlors, Jewish weddings and Passover Seders, went on stabbing rampages, plowed trucks and cars into Israelis, shot Israelis including pregnant Jewish women waiting at bus stops, and more.

The real “dehumanization” is the Palestinian Authority’s and Hamas’ demonization of Jews and incitement and payments to terrorists to murder Jews and Americans.

Tlaib/Omar threatened Israel with more boycotts, cutting off aid, etc: Tlaib/Omar demanded that everyone should stop visiting America’s greatest ally Israel, the only human rights loving democracy in the Mideast, and threatened aid cut-offs to Israel. They ignored the fact that U.S. aid benefits the U.S. with technology, security assistance, stopping terror attacks around the world, and more. Notably, long before Tlaib/Omar’s proposed visit, they co-sponsored an anti-Israel pro-BDS House resolution – and absurdly and outrageously likened boycotts against Israel to boycotts against Nazis.

Tlaib falsely claimed that Trump is pitting Jews and Muslims against one another, when in fact radical Jew-haters Tlaib/Omar are creating the division. ZOA has documented Tlaib’s and Omar’s repeated antisemitic anti-Israel tweets, statements, proposed legislation, and terrorist affiliations.

Tlaib/Omar instead tried to whitewash Miftah’s abominable record by asserting that Miftah sponsored a previous Congressional trip.  Tlaib/Omar neglected to mention that the previous Miftah trip including meetings with a PFLP terrorist. The Israeli Minister of Strategic Affairs “Terrorists in Suits” report, which documented the ties between BDS and terror groups, revealed that Shawan Jabarin was a PFLP operative. NGO Monitor similarly reported about the previous Miftah trip:

“In 2016, MIFTAH sponsored a trip for five US Congressmen to visit east Jerusalem and Ramallah. According to the trip’s itinerary, the Congressmen met with Shawan Jabarin, who has alleged ties to the PFLP terrorist organization and as such has been denied exit visas by Israel and Jordan.  Following the trip, one of the congressmen, Hank Johnson, made comparisons between Israeli settlers and termites. After significant criticism, Johnson apologized for his “poor choice of words.”

Tlaib/Omar also invoked falsehood-purveying anti-Israel NGOs: Omar/Tlaib also asserted that they planned to meet with former IDF soldiers to hear about various anti-Israel allegations. This was a reference to notorious anti-Israel NGOs, such as B’tselem (also see NGO Monitor report), which have a long history of disseminating falsehoods against Israel and the IDF. This further demonstrates that the sole purpose of Tlaib/Omar’s visit was to demonize Israel with one falsehood after another. This was never intended to be a legitimate fact finding trip by these two Israelophobic, bigoted, hateful members of Congress, Tlaib and Omar.

We would love to hear from you! Please fill out this form and we will get in touch with you shortly.
Trending Z
News August 19, 2019
ZOA Condemns U.S. State Dept. & U.S. Amb. Nides For Siding with Antisemitic, Discriminatory Palestinian & Hamas Terrorists re: the Temple Mount, Violating Jews’ Religious Freedom
Uncategorized August 19, 2019
FLASH: ISRAEL-JORDAN PEACE TREATY (1994) GUARANTEES JEWS ACCESS TO THE TEMPLE MOUNT – LET MY PEOPLE PRAY
Uncategorized August 19, 2019
ZOA Analysis: Most American Rabbis Who Are Boycotting Some Israeli Ministers Are From Extremist Left Wing Groups (J Street; T’ruah; JVP)
Uncategorized August 19, 2019
Israel’s “Right of Return” Grandparent Clause is De-Judaizing the Jewish State – Eliminate It
Center for Law & Justice
We work to educate the American public and Congress about legal issues in order to advance the interests of Israel and the Jewish people.
We assist American victims of terrorism in vindicating their rights under the law, and seek to hold terrorists and sponsors of terrorism accountable for their actions.
We fight anti-Semitism and anti-Israel bias in the media and on college campuses.
We strive to enforce existing law and also to create new law in order to safeguard the rights of the Jewish people in the United States and Israel.
Our Mission
ZOA STATEMENT
The ZOA speaks out for Israel – in reports, newsletters, and other publications. In speeches in synagogues, churches, and community events, in high schools and colleges from coast to coast. In e-mail action alerts. In op-eds and letters to the editor. In radio and television appearances by ZOA leaders. Always on the front lines of pro-Israel activism, ZOA has made its mark.
Related Articles
OP-ED Obama Thwarted Fighting Iran-Backed Hezbollah on Drugs/Terror-to Secure Iran Nuke Deal

The Zionist Organization of America (ZOA) has pointed to a new in-depth investigation by Politico which reveals that, “In its determination to secure a nuclear deal with Iran, the Obama administration derailed an ambitious law enforcement campaign [Project Cassandra] targeting drug trafficking by the Iranian-backed terrorist group Hezbollah, even as it was funneling cocaine into […]

Zionist Organization of America (ZOA) President Morton A. Klein released the following statement: The United Nations has once again demonstrated that, instead of furthering truth, peace and international harmony, the UN is an antisemitic Islamist-dominated lynch mob focused on maligning Jews for defending themselves from Hamas-led attempts to invade Israel to murder Jews; and that […]