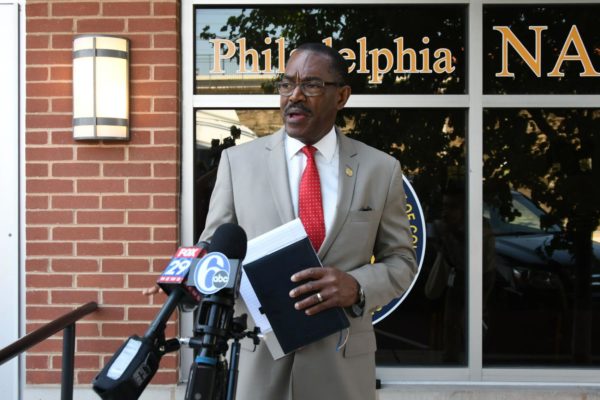 The tenure of vile Jew-hater and Nation of Islam leader Rodney Muhammad as president of the Philadelphia branch of the NAACP may be coming to a close. Yet, stubborn questions remain.

The Zionist Organization of America (ZOA) has worked hard to shed light on the depth of Rodney Muhammad’s incessant efforts to incite anger, resentment, and mistrust of Jews within Philadelphia’s black community. He was a Nation of Islam minister in Philadelphia and controlled one of Louis Farrakhan’s mosques long before he was chosen to lead an NAACP chapter there.

The ZOA sounded the alarm, regularly letting people know when Rodney Muhammad posted photos of himself at Farrakhan’s speeches. Other Jewish organizations were silent, and the national NAACP did nothing. It was only when Billy Penn let it be known on July 24 that Rodney Muhammad had posted a particularly outrageous anti-Jewish meme that others in the Jewish community joined ZOA.

The meme showed a caricature of an ugly, greedy yarmulke-wearing Jew pressing his hand down on victims of his oppression, accompanied by photos of three black celebrities with the caption “To learn who rules over you, simply find out who you’re not allowed to criticize.”

But posting this meme was hardly Muhammad’s first offense – or his last one. Just last week, on August 24, on his mosque’s Facebook page, a video was posted attempting to link the shooting of a black man in Kenosha, WI, by a police officer with training some American police officers receive in Israel. The linkage is patently false.

A month ago, he tweeted that Jews have too much power, get people fired, and are “destroying lives and careers.” On his Facebook page appears a post referencing Farrakhan and “the Sahedrin[sic]… creating mob psychology to crucify Jesus.”

On his mosque’s Facebook page, “Satan’s synagogue” is referenced, and one post quotes from Farrakhan’s July 4 speech referring to Jews as “Satan,” noting the obligation of Muslims to “throw” the so-called “stone of truth” at “Satan … ‘til we knock out its brains.”

Another post links “white supremacist Jews” with the Ku Klux Klan, and dozens of links to videos promoting anti-Jewish rhetoric appear as well.

In light of all this evidence, why do the media, most of the Jewish communal leadership, and the national NAACP pretend that Muhammad’s posting of an anti-Semitic caricature was an isolated incident? They, falsely, give the impression to the black community and others that Jews caused Muhammad to lose his NAACP position because of one incident. Nothing could be further from the truth.

And let’s be clear: The Nation of Islam and its leader, Louis Farrakhan, have been the longest-running, most consistent, and widely accepted purveyors of Jew-hatred in America in recent history. That Rodney Muhammad – as a top-tier leader within that movement – was allowed to continue leading a chapter of an important, noble organization that has done tremendous good is hard to understand.

Incidentally, as of 6:00 p.m. on September 1, Rodney Muhammad is still listed as president of the Philadelphia NAACP. On its Facebook page is a link to a Philadelphia Tribune article claiming that the “national leadership of the NAACP will take over the Philadelphia chapter and replace all of its leadership,” but it features no statement by the chapter itself. Nor is anything posted on the national NAACP’s Twitter feed that confirms the media report.

One is left to wonder: Why hasn’t the NAACP nationally announced to its members and supporters the action it reportedly took? And what reforms will the NAACP make to ensure Jew-haters and those who foment Jew-hatred – including Nation of Islam leaders – are never again put in positions of authority? When will the NAACP call out Farrakhan and the Nation of Islam for fomenting Jew-hatred and jeopardizing the black-Jewish alliance?

Especially since Jews created, funded, and even initially led the NAACP, the organization should ensure that the black-Jewish alliance remains strong as our communities face common enemies who mean harm to both.

Hopefully this particular episode is behind us and lessons have been learned. But as Jew-hatred increases throughout America, we at ZOA call on other Jewish organizations to be vigilant, to monitor the activities of those who mean harm to the Jewish community, and to speak out clearly and loudly when these activities become known.

Morton A. Klein is national president of the Zionist Organization of America. Follow him on Twitter @mortonaklein7. Steve Feldman is the executive director of the ZOA greater Philadelphia chapter.
This op-ed was originally published by the Jewish Press here.

We would love to hear from you! Please fill out this form and we will get in touch with you shortly.
Trending Z
News September 18, 2020
ZOA Condemns U.S. State Dept. & U.S. Amb. Nides For Siding with Antisemitic, Discriminatory Palestinian & Hamas Terrorists re: the Temple Mount, Violating Jews’ Religious Freedom
News September 18, 2020
ZOA’s Klein JPost Op-Ed: There is Nothing Extreme About Israel’s New Government
Uncategorized September 18, 2020
FLASH: ISRAEL-JORDAN PEACE TREATY (1994) GUARANTEES JEWS ACCESS TO THE TEMPLE MOUNT – LET MY PEOPLE PRAY
Uncategorized September 18, 2020
ZOA Analysis: Most American Rabbis Who Are Boycotting Some Israeli Ministers Are From Extremist Left Wing Groups (J Street; T’ruah; JVP)
Center for Law & Justice
We work to educate the American public and Congress about legal issues in order to advance the interests of Israel and the Jewish people.
We assist American victims of terrorism in vindicating their rights under the law, and seek to hold terrorists and sponsors of terrorism accountable for their actions.
We fight anti-Semitism and anti-Israel bias in the media and on college campuses.
We strive to enforce existing law and also to create new law in order to safeguard the rights of the Jewish people in the United States and Israel.
Our Mission
ZOA STATEMENT
The ZOA speaks out for Israel – in reports, newsletters, and other publications. In speeches in synagogues, churches, and community events, in high schools and colleges from coast to coast. In e-mail action alerts. In op-eds and letters to the editor. In radio and television appearances by ZOA leaders. Always on the front lines of pro-Israel activism, ZOA has made its mark.
Connect with us
Sign up for our Newsletter