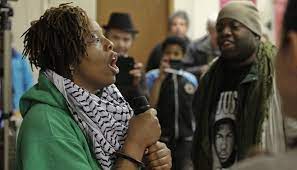 ZOA is horrified that UCLA is giving the keynote commencement speech honor tomorrow to antisemitic Black Lives Matter co-founder Patrisse Cullors – who calls for destroying the Jewish State of Israel.

At a Harvard Law School panel in 2015, entitled “Globalizing Ferguson: Racialized Policing and International Resistance,” Cullors called for students to “step up boldly and courageously to end the imperialist project that’s called Israel”; absurdly described the Palestinian Arab cause as “our generation’s South Africa”; and declared that “we’re doomed” if Israel is not brought to an “end.” (See “BLM Co-Founder Called in 2015 to ‘End Imperialist Project’ of Israel,” by Samuel Chamberlain, New York Post, May 30, 2021.)

It is an utter antisemitic racist disgrace to have a keynote speaker at a university commencement who calls for the annihilation of the Jewish state.

Black Lives Matter stands in solidarity with Palestinians. We are a movement committed to ending settler colonialism in all forms and will continue to advocate for Palestinian liberation. (always have. And always will be). #freepalestine

“Ending settler colonialism” is yet another defamatory phrase used by Cullors and BLM to demand Israel’s annihilation.

Cullors also took an anti-Israel trip to Israel (which Cullors called “occupied Palestine”), sponsored by the PFLP-terror-group-affiliated “Dream Defenders.” (See “American NGOs are Intertwined with PFLP Terrot Group,” Jerusalem Center for Public Affairs.) Cullors then declared in an Ebony Magazine article: “This is an apartheid state. We can’t deny that, and if we do deny it we are a part of the Zionist violence. There are two different systems here in occupied Palestine. Two completely different systems. Folks are unable to go to parts of their own country. Folks are barred from their own country.”

Cullors’ defamatory accusations of “apartheid” and “Zionist violence” against the human rights-loving-and-observing state of Israel should disqualify Cullors from giving a keynote speech.

What sort of message does UCLA’s choice of Cullors send to young people? Does UCLA want to inspire its graduates to be haters and antisemites? How in the world could UCLA Luskin Dean Gary Segura say that Jew-hating, Israel-hating, Marxist, America-hating, blood libel-spreader Cullors “is the ideal person to deliver a message of mission to our 2021 graduates”? Sick!!

Notably, UCLA has a large population of Jewish students—2,500 Jewish undergraduates and 600 graduate students. UCLA’s selection of an antisemite such as Cullors to give the keynote speech is insensitive, cruel, and insulting to Jewish students who are already under attack at UCLA and other universities.

And what about the Black community that Cullors has been profiting off of? Cullors used her BLM-gotten gains to go on a $3.2 million dollar real estate buying spree. Meanwhile, grief-stricken Black mothers condemned Cullors for profiting from the deaths of their sons. (See “Mothers Criticize BLM Activists for Profiting Off Their Dead Sons,” by Isabel Vincent, New York Post, May 29, 2021.) Does UCLA want its graduates to aspire to become race-hustlers like Patrisse Cullors?

Shame on UCLA. A major public apology from UCLA, its president, and its Board is in order.

We would love to hear from you! Please fill out this form and we will get in touch with you shortly.
Trending Z
News June 10, 2021
At ZOA Gala Secy Pompeo Gave the Greatest, Most Pro-Israel Speech Ever Delivered by a Public Official
News June 10, 2021
Dershowitz in Arutz 7: NYC’s Temple Emanu-El Silences a Pro-Israel Voice & Promotes an Anti-Israel Voice
Uncategorized June 10, 2021
Jewish Press: Has Deborah Lipstadt Undercut Both Herself and Future Antisemitism Envoys?
News June 10, 2021
NEW YORK POST: Democratic Leaders’ Shocking Silence Over Attacks on Israel by Fellow Dems
Our Mission
ZOA STATEMENT
The ZOA speaks out for Israel – in reports, newsletters, and other publications. In speeches in synagogues, churches, and community events, in high schools and colleges from coast to coast. In e-mail action alerts. In op-eds and letters to the editor. In radio and television appearances by ZOA leaders. Always on the front lines of pro-Israel activism, ZOA has made its mark.
Center for Law & Justice
We work to educate the American public and Congress about legal issues in order to advance the interests of Israel and the Jewish people.
We assist American victims of terrorism in vindicating their rights under the law, and seek to hold terrorists and sponsors of terrorism accountable for their actions.
We fight anti-Semitism and anti-Israel bias in the media and on college campuses.
We strive to enforce existing law and also to create new law in order to safeguard the rights of the Jewish people in the United States and Israel.
Related Articles
OP-ED ZOA Praises Pres-Elect Bolsonaro for Vowing to Move Brazilian Embassy to Jerusalem