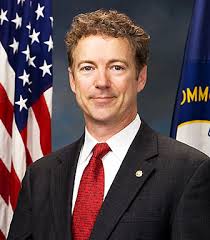 The Zionist Organization of America (ZOA) supports Senator Rand Paul (R-KY)’s proposal for legislation to cut off U.S. aid to Mahmoud Abbas’ Palestinian Authority (PA) unless it recognizes Israel’s right to exist as a Jewish state. Senator Paul has said that he will introduce a bill to that effect next week.

Last week, Abbas’ Fatah/PA concluded a reconciliation agreement with Hamas, the U.S.- and E.U.-recognized terrorist group that calls in its Charter for the destruction of Israel and the murder of Jews. Senator Paul, a member of the Senate Foreign Relations Committee, said that the Fatah/PA/Hamas agreement:

“…brings both danger and opportunity to the peace process, and the next five weeks may prove critical. Israel cannot be expected to negotiate with an entity that does not believe it should exist and that has used terrorist tactics to seek its end. That being said, the new unity government has a chance to put itself on the record as clearly believing in the right of Israel to exist as a Jewish state, as Israel recognizes the right of a Palestinian state to exist … In the absence of such a clear, unambiguous statement on the part of the newly unified Palestinian government, the United States should act to enforce the law and cut off aid to the Palestinian government until they recognize Israel’s right to exist … I will introduce a measure when Congress returns this week to make all future aid to the Palestinian government conditional upon this statement, with a cutoff date of five weeks from now if, upon its formation, the new government does not take this vital step toward peace” (‘Sen. Paul: End Aid to Palestinian Government until They Recognize Israel’s Right to Exist,’ April 28, 2014).

“…the United States should act to enforce the law and cut off aid to the Palestinian government until they recognize Israel’s right to exist.”

The PA officially recognizes Israel, but not as a Jewish state, while the constituent bodies of the PA, including the Fatah Party, headed by Abbas and which controls the PA, have never even done that. In fact, Mahmoud Abbas and other senior PA officials have said publicly in Arabic to Arab audiences that Fatah does not recognize Israel and that neither Fatah nor other Palestinian groups must do so. For example, Abbas said in 2006, “It is not required of Hamas, or of Fatah, or of the Popular Front to recognize Israel,” adding only that the PA government must recognize Israel for the purposes of extracting concessions from it. Abbas and the PA have also publicly stated countless times up to the present day that they will not recognize Israel as a Jewish state.

ZOA National President Morton A. Klein said, “We praise Senator Paul’s initiative on defunding the PA in the absence of a commitment by the PA to recognize Israel as a Jewish state.

“The ZOA has long argued that U.S. funding of the PA should be conditional on the PA recognizing Israel as a Jewish state and fulfilling its 20-year old commitments under the Oslo agreements to arrest, jail and extradite terrorists, disband and outlaw terror groups and confiscate illegal weaponry, and to end incitement to hatred and murder against Jews and Israel in the PA-controlled media, mosques, schools and youth camps that fuel terrorism and conflict.

“Two months ago, I had a private meeting with Senator Paul and raised the issue of U.S. aid continuing at the level of some $600 million per year, despite PA non-compliance with its obligations under the Oslo agreements. Senator Paul strongly agreed that the PA must not continue receiving this U.S. aid while they continue violating every commitment they undertook under Oslo. We are very pleased to see Senator Paul is taking action on this important issue.”

We would love to hear from you! Please fill out this form and we will get in touch with you shortly.
Trending Z
News April 30, 2014
ZOA Condemns U.S. State Dept. & U.S. Amb. Nides For Siding with Antisemitic, Discriminatory Palestinian & Hamas Terrorists re: the Temple Mount, Violating Jews’ Religious Freedom
Uncategorized April 30, 2014
FLASH: ISRAEL-JORDAN PEACE TREATY (1994) GUARANTEES JEWS ACCESS TO THE TEMPLE MOUNT – LET MY PEOPLE PRAY
Uncategorized April 30, 2014
ZOA Analysis: Most American Rabbis Who Are Boycotting Some Israeli Ministers Are From Extremist Left Wing Groups (J Street; T’ruah; JVP)
Uncategorized April 30, 2014
Israel’s “Right of Return” Grandparent Clause is De-Judaizing the Jewish State – Eliminate It
Center for Law & Justice
We work to educate the American public and Congress about legal issues in order to advance the interests of Israel and the Jewish people.
We assist American victims of terrorism in vindicating their rights under the law, and seek to hold terrorists and sponsors of terrorism accountable for their actions.
We fight anti-Semitism and anti-Israel bias in the media and on college campuses.
We strive to enforce existing law and also to create new law in order to safeguard the rights of the Jewish people in the United States and Israel.
Our Mission
ZOA STATEMENT
The ZOA speaks out for Israel – in reports, newsletters, and other publications. In speeches in synagogues, churches, and community events, in high schools and colleges from coast to coast. In e-mail action alerts. In op-eds and letters to the editor. In radio and television appearances by ZOA leaders. Always on the front lines of pro-Israel activism, ZOA has made its mark.
Related Articles
OP-ED Fmr. Secy. Colin Powell: Defense Dept. Influences Presidential Policy