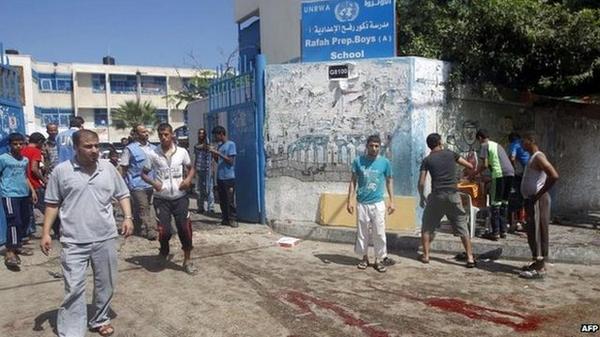 The Zionist Organization of America (ZOA) has pointed to emerging and strong evidence that the death of Arab Gazan civilians blamed on an Israeli strike upon an UNWRA school earlier this week –– for which the Obama Administration condemned Israel –– was in fact staged by Nazi-like  terrorist group Hamas.

The ZOA has called upon the Obama Administration to retract its condemnation, noting that the evidence now shows that Israel did indeed, as it claimed at the time, fire at terrorists just outside the school, where a missile strike on the road outside is plainly evident; that dead bodies were moved by Hamas from outside the school to inside its courtyard to mislead people into believing that the school itself had been hit; that the body of a small girl was added to the pile of adult bodies to make it look as if all the deaths came from the school, then was later removed, leaving doubt as to whether she was in fact killed; and that the bodies of two dead men photographed outside the school were also later shown inside the school courtyard, indicating they too were moved. (Rick Moran, ‘Was a UN School in Gaza Really Bombed? (Update: No, It Wasn’t),’ PJ Tatler, August 3, 2014).

The  Israeli strike directed at Hamas terrorists on the scene reportedly killed ten Palestinian civilians and wounded dozens more at a UN Relief & Works Agency (UNRWA)-run school which was serving as shelter during the on-going hostilities for 3,000 Gazans. This led State Department Spokeswoman, Jan Psaki, to condemn Israel saying, “The United States is appalled by today’s disgraceful [attack] outside an UNRWA school in Rafah sheltering some 3,000 displaced persons, in which at least 10 more Palestinian civilians were tragically killed … We once again stress that Israel do more to meet its own standards and avoid civilian casualties” (‘State Department Condemns “Disgraceful” Shelling Of U.N. School In Gaza,’ Huffington Post, August 3, 2014).

ZOA National President Morton A. Klein said, “Israel has received massive condemnation, including from the Obama Administration over this incident –– condemnation that appeared even before the facts in the case were established.

“Now, after two days, it appears that Israel was correct when it said that it fired at terrorists outside the school and that it did not strike the school directly. It also appears that at least some of the dead bodies shown on television were placed there by Hamas after the event and may not have been killed by Israel action at all.

“President Obama should immediately retract the astonishing condemnation uttered by the State Department over the weekend. It would have bend bad enough to make this condemnation even if Israel had inadvertently struck the school.

“As I said yesterday, can one imagine the outrage in Washington if the Israeli government condemned a U.S. strike on Al-Qaeda and Taliban forces near a school in Afghanistan which inadvertently resulted in civilian deaths? Would this be proper? Would this be the behavior of an ally?

“To add insult to injury, this condemnation came only a few hours after Israel began a partial unilateral pull-back from Gaza that was met by increased terrorist rocket and mortar fire.

“Such condemnation incentivizes Hamas’ terrorism and its resort to war crimes against the Jewish state. It makes such crimes pay in the coin of opprobrium for Israel, which, coming from the country supposed to be Israel’s best ally, the U.S. reaction can only encourage. This would be bad at any time, but it is inexcusable at a time of heightened anti-Semitic frenzy in Europe and elsewhere. This adds fuel to the fire of Jew-hatred, rantings and actions.

“This is also giving aid and comfort to Hamas. President Obama should immediately apologize that his Administration jumped to conclusions and uttered a false and damaging condemnation of an ally. We strongly urge President Obama to publicly state that Hamas started this war by unprovoked, illegal missile attacks upon Israeli civilians, compelling Israel to take legitimate defensive steps against Hamas to end the threat to its own citizens. We also strongly urge him to condemn the anti-Semitic demonstrations in Europe and elsewhere which have been marked by the most horrific anti-Semitic expression.”

We would love to hear from you! Please fill out this form and we will get in touch with you shortly.
Trending Z
News August 6, 2014
ZOA Deplores that Pres. Trump Dined with Jew-Haters Kanye West & Nick Fuentes, and Demands he Condemn Them
News August 6, 2014
Newsweek Op-Ed by ZOA’s Mort Klein: ZOA Honoring Trump as the Greatest President Ever for Israel and American Jews
Uncategorized August 6, 2014
ZOA Honors Trump With Rarely Given Herzl Award for His Great Pro-Israel Work – Joins Ranks of Balfour, Truman, Begin, Meir, Ben-Gurion
Uncategorized August 6, 2014
Zionist Organization of America Honors Donald Trump for Support for Israel, Jewish Community
Center for Law & Justice
We work to educate the American public and Congress about legal issues in order to advance the interests of Israel and the Jewish people.
We assist American victims of terrorism in vindicating their rights under the law, and seek to hold terrorists and sponsors of terrorism accountable for their actions.
We fight anti-Semitism and anti-Israel bias in the media and on college campuses.
We strive to enforce existing law and also to create new law in order to safeguard the rights of the Jewish people in the United States and Israel.
Our Mission
ZOA STATEMENT
The ZOA speaks out for Israel – in reports, newsletters, and other publications. In speeches in synagogues, churches, and community events, in high schools and colleges from coast to coast. In e-mail action alerts. In op-eds and letters to the editor. In radio and television appearances by ZOA leaders. Always on the front lines of pro-Israel activism, ZOA has made its mark.
Related Articles
OP-ED CIA Nominee Brennan Dismisses Radical Islam, Calls J’lem Al-Quds, Whitewashes Hizballah

The Zionist Organization of America (ZOA) is shocked and has strongly criticized Brandeis University’s decision to rescind the awarding of an honorary degree to Ayaan Hirsi Ali at Brandeis’ commencement ceremony in May.  Ms. Hirsi Ali is a brave and outspoken author, scholar and advocate for the civil rights of women and girls around the […]