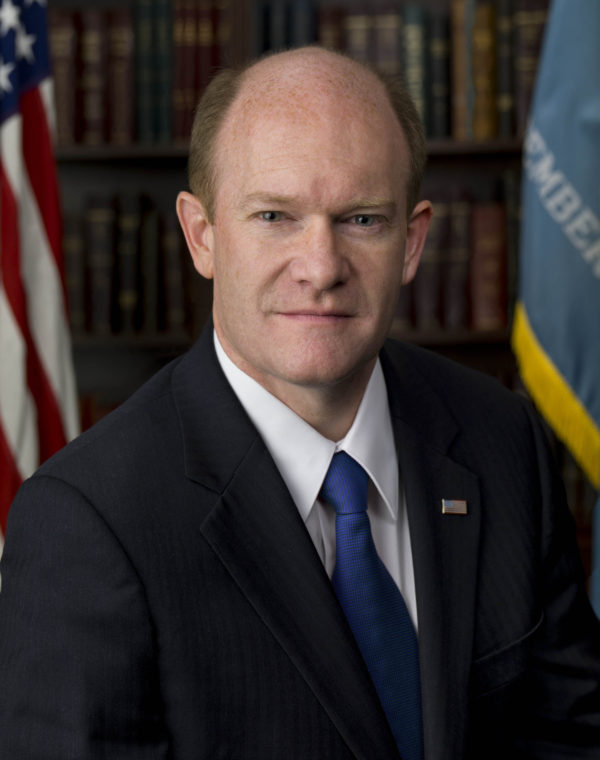 The ZOA praises Senator Chris Coons (D-Del) for his remarks on the Hugh Hewitt show today agreeing to press for a vote to confirm pro-Israel nominee Ric Grenell as U.S. Ambassador to Germany, and his statement that “the vacancy in Germany has just gone on far too long,” and explanation of the importance of confirming Mr. Grenell: Effective representation requires an ambassador.

The vote to confirm Mr. Grenell is indeed long overdue:  Mr. Grenell was nominated for the Ambassador post back in September 2017, and approved by the Senate Foreign Relations Committee on October 26, 2017.  Mr. Grenell has impeccable credentials: He holds a masters’ degree from Harvard’s Kennedy School of Government, served as a political advisor to various prominent officials, and was the longest serving U.S. spokesman at the United Nations.  He is an extraordinarily strong supporter of Israel, and understands the reality of the Arab-Islamic war against Israel.  Mr. Grenell is also the first openly gay nominee of the Trump administration.

This is a sensitive time, when a U.S. Ambassador who will provide effective representation in Germany is urgently needed.  Issues of concern include German arms sales to Iran and other Middle Eastern players (See, e.g. “Germany Sold Technology To Iran For Use In Syrian Chemical Attacks,” by Benjamin Weinthal, Jerusalem Post, Feb. 5, 2018); Germany’s key role in any efforts to sanction Iran and/or rewrite the Iran deal; and the threat that Germany will violate its agreement to not run against Israel for a UN Security Council seat.  (See “ZOA ACTION ALERT: Urge U.S. to Insist Germany Keep its Word to Israel for Unopposed United Nations Security Council Seat, Mar. 14, 2018.)

In response to Hugh Hewitt’s question today: “Will you go to your leader and urge that Rick Grenell get a vote?,” Senator Coons responded, “Yes.”  In addition, Senator Coons explained:

“The last time we had this conversation, I went and checked with the ranking member of Foreign Relations, and he said that he did not know any longer who was holding Grenell up, that there were two senators who’d been holding him up and who’d released their hold. This one’s dragged on far too long. I think we have a significant problem, Hugh, in that we have more than 25 critical nations – South Korea, for example, South Africa, Germany, obviously, where we do not have an ambassador. And when I’ve traveled to countries where we don’t have an ambassador, it makes a real difference in terms of the level of our relationship and their ability to effectively represent us. Senator Graham and I recently led a bipartisan CODEL. We went to the United Kingdom, to Jordan, to Israel and to Greece. And in the country where we lacked an ambassador, although he’s wonderful and very capable, Henry Wooster is our Chargé in Amman. It just, it’s not quite the same. And the world of diplomacy is one that really follows sort of rank order, chain of command. And in the absence of an ambassador, some places in the world, we really can’t have the impact we need to. In South Korea, for us to not have an ambassador, given the importance of the negotiations with North Korea, I think, is a big mistake. So I’ve been pressing. The Foreign Relations Committee just cleared four more ambassadors this week. I do think that Senator Corker and Senator Menendez work well together. The, I don’t think the Foreign Relations Committee is the holdup. But the vacancy in Germany has gone on just far too long. And I’ll be glad to press for Grenell to get a vote, because we shouldn’t have a country as significant as Germany, we shouldn’t have any country without an ambassador, but that’s a major European power.”

Senator Coons also told Business Insider a few weeks ago, “it’s long overdue for us to have an ambassador to Germany.”

ZOA praises Senator Coons for his statements and proactive efforts to obtain a confirmation vote on Rick Grenell.  ZOA also urges other U.S. Senators to follow Senator Coons example, and to press for a prompt vote to confirm Ric Grenell.

We would love to hear from you! Please fill out this form and we will get in touch with you shortly.
Trending Z
Uncategorized March 22, 2018
FLASH: ISRAEL-JORDAN PEACE TREATY (1994) GUARANTEES JEWS ACCESS TO THE TEMPLE MOUNT – LET MY PEOPLE PRAY
Uncategorized March 22, 2018
ZOA Analysis: Most American Rabbis Who Are Boycotting Some Israeli Ministers Are From Extremist Left Wing Groups (J Street; T’ruah; JVP)
Uncategorized March 22, 2018
Israel’s “Right of Return” Grandparent Clause is De-Judaizing the Jewish State – Eliminate It
Uncategorized March 22, 2018
Exclusive: ZOA Accuses Ilhan Omar of Hating the U.S. ‘as Much as Israel,’ Lauds Kevin McCarthy for ‘Throwing Her Off the HFAC’
Center for Law & Justice
We work to educate the American public and Congress about legal issues in order to advance the interests of Israel and the Jewish people.
We assist American victims of terrorism in vindicating their rights under the law, and seek to hold terrorists and sponsors of terrorism accountable for their actions.
We fight anti-Semitism and anti-Israel bias in the media and on college campuses.
We strive to enforce existing law and also to create new law in order to safeguard the rights of the Jewish people in the United States and Israel.
Our Mission
ZOA STATEMENT
The ZOA speaks out for Israel – in reports, newsletters, and other publications. In speeches in synagogues, churches, and community events, in high schools and colleges from coast to coast. In e-mail action alerts. In op-eds and letters to the editor. In radio and television appearances by ZOA leaders. Always on the front lines of pro-Israel activism, ZOA has made its mark.
Related Articles
OP-ED BY: ZOA ZOA Praises Obama Admin. For Walk-Out of U.S. Ambassador From Talks After Iran Accused Israel of “Genocide”