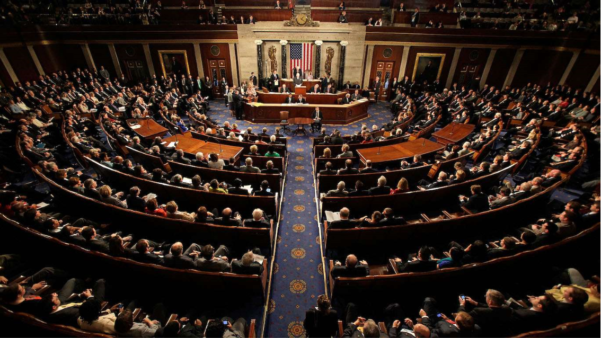 UPDATE: The House of Representatives approved H. Res. 246 on July 24.  Strong pro-Israel Congress members, such as Louie Gohmert, abstained because of the Palestinian state insertion in the resolution.  Israeli Minister Ze’ev Elkin slammed the “two-state” insertion.  Minister Elkin explained: “A Palestinian state is not the solution.  Instead it is the root of the problem.”  Minister Elkin also noted that no one asked Israel prior to inserting the “two-state” language.  As of now, the Senate has not voted on the problematic S. Res. 120.

The House of Representatives’ “Anti-BDS” resolution, expected to be voted on next week, H. Res. 246, and its Senate companion, S. Res. 120, are prime examples of “how to adopt bad policy 101.” Basically, the bad policy is inserted into an otherwise good or decent bill or resolution. In this instance, the bad policy (promoting the creation of a Palestinian-Arab terror state) is extremely perilous. In fact, a Palestinian-Arab state would be more dangerous for Israel than BDS is. So, as a result of this insertion, the net effect of these resolutions is to harm Israel.

H. Res. 246 and S. Res. 120 are each entitled “Opposing efforts to delegitimize the State of Israel and the Global Boycott, Divestment, and Sanctions Movement targeting Israel”. The resolutions on this important issue should have dealt solely with their title subject – opposing anti-Israel, antisemitic boycotts, divestment and sanctions (BDS). Anti-Israel BDS is antisemitic economic warfare to destroy the Jewish state and people. There are well documented close ties between designated foreign terrorist groups and the terrorists that run BDS organizations.

Unfortunately, H. Res. 246 and S. Res. 120 inserted an unnecessary and harmful statement “strongly supporting” a “Palestinian state” next to Israel, as the pre-determined outcome of Israeli-Palestinian negotiations.

A Palestinian-Arab state would be another rocket-launching, Hamas-run, Iranian-satellite terror regime dedicated to Israel’s destruction, near Israel’s major population centers. As Benjamin Netanyahu succinctly explained at the 2002 Likud central committee: “Once you give them a state . . . . We will thus have created with our own hands a threat to our very existence.”

Moreover, pushing for a Palestinian-Arab state on land lawfully designated for the Jewish state violates U.S. treaty obligations (the 1924 Anglo-American Convention/Treaty and UN Charter) guaranteeing the Jewish people’s rights to the entire mandatory area, including Judea/Samaria.

Pushing for a Palestinian-Arab state also contradicts the Oslo Accords, which, as confirmed by then-Prime Minister Yitzchak Rabin’s last speech to the Knesset, contemplated a Palestinian entity that is less than a state.

Promoting a Palestinian-Arab state also contradicts the current (2016) Republican platform. No Republican should support such a position that violates its party platform.

The anti-BDS language in H. Res. 246 and S. Rep. is decent. The resolutions explain that the anti-Israel BDS movement denies the right of the Jewish people to their homeland; excludes Israelis from the economic, cultural, and academic life of the rest of the world; and violates core goals of university and cultural development.

Congress surely can retain the good anti-BDS language, while eliminating the unnecessary, dangerous support for a Palestinian-Arab terror state in these resolutions.

Sadly, this is the second time we’ve had to bring this issue to light. In March, the ZOA urged AIPAC not to lobby for H. Res. 246, when we learned it was on the AIPAC conference lobbying agenda. People attending the AIPAC conference who spoke with us were unaware that the H. Res. 246 included the Palestinian state provision, and thought that they were only lobbying for an anti-BDS resolution. (See “ZOA Urges AIPAC: Don’t Lobby for House “BDS” Resolution that Includes Call for Creating a Palestinian Terror State,” Mar. 25, 2019.)

We are dismayed that AIPAC sent out emails last week, again urging passage of H. Res. 246, as is, with the dangerous support-for-a-Palestinian-Arab-state language still included.

Some well-meaning folks may think that inserting Palestinian-Arab-state language will persuade Congresspersons who are not particularly friendly to Israel to vote for an anti-BDS resolution.

Obtaining a few votes from unfriendly Congressmembers for a toothless anti-BDS resolution is not worth promoting a Hamas-Fatah-Iran Palestinian-Arab terror state that threatens Israel’s existence.

An Anti-BDS Law with Real Teeth Is Needed: Of course, we need much more that a non-binding resolution to combat harmful antisemitic BDS. The House should pass an actual anti-BDS law with real teeth in it, as the Senate did early this year, when the Senate passed S. 1. Sadly, S. 1’s companion bill, H.R. 336, the Strengthening America’s Security in the Middle East Act of 2019, which contains the Combatting BDS Act of 2019, has been sitting in the House with no action since January.

At the very least, Congress should pass a “clean” resolution expressing opposition to anti-Israel antisemitic BDS – without inserting a phrase inimical to the Jewish people.

The Other Dangerous “Palestinian State Resolutions”: There is also no need to include support for a Palestinian-Arab state in the anti-BDS resolution because there already are separate House resolutions that support creating a terror Palestinian-Arab state, on land designated for the Jewish homeland under international law. Last week, the Democratic-controlled House Foreign Affairs Committee reportedly passed two such resolutions that are headed for a floor vote:

(2) H. Res. 138, under the guise of commending better relations between Israel and certain existing Arab majority states, wrongly claims that creating a Palestinian-Arab state is “essential” for peace, and seeks Arab majority states’ involvement in a process to bring such a disaster about.

Congress, especially the House of Representatives, must do better. It’s time for a strong, unvarnished answer to Ilhan Omar’s outrageous antisemitic House Resolution 496 supporting anti-Israel BDS. Congress needs to remove from H. Res. 246 and S. Res. 120 the support for a Palestinian-Arab state that will become a Hamas/Iran terror state endangering the Jewish States continued existence.

We would love to hear from you! Please fill out this form and we will get in touch with you shortly.
Trending Z
Uncategorized July 22, 2019
ZOA Analysis: Most American Rabbis Who Are Boycotting Some Israeli Ministers Are From Extremist Left Wing Groups (J Street; T’ruah; JVP)
Uncategorized July 22, 2019
ZOA: Israel’s Reasonable Judicial Reform Proposals Are Good for Democracy, the Rule of Law and the Economy
News July 22, 2019
ZOA is Disappointed, Offended and Frightened by 211 U.S. House Votes Supporting Jew-Hating, Israel-Hating Rep. Ilhan Omar
Uncategorized July 22, 2019
Israel’s “Right of Return” Grandparent Clause is De-Judaizing the Jewish State – Eliminate It
Center for Law & Justice
We work to educate the American public and Congress about legal issues in order to advance the interests of Israel and the Jewish people.
We assist American victims of terrorism in vindicating their rights under the law, and seek to hold terrorists and sponsors of terrorism accountable for their actions.
We fight anti-Semitism and anti-Israel bias in the media and on college campuses.
We strive to enforce existing law and also to create new law in order to safeguard the rights of the Jewish people in the United States and Israel.
Our Mission
ZOA STATEMENT
The ZOA speaks out for Israel – in reports, newsletters, and other publications. In speeches in synagogues, churches, and community events, in high schools and colleges from coast to coast. In e-mail action alerts. In op-eds and letters to the editor. In radio and television appearances by ZOA leaders. Always on the front lines of pro-Israel activism, ZOA has made its mark.
Related Articles
OP-ED BY: Morton A. Klein, ZOA Jerusalem is Holy to Jews, Not to Muslims