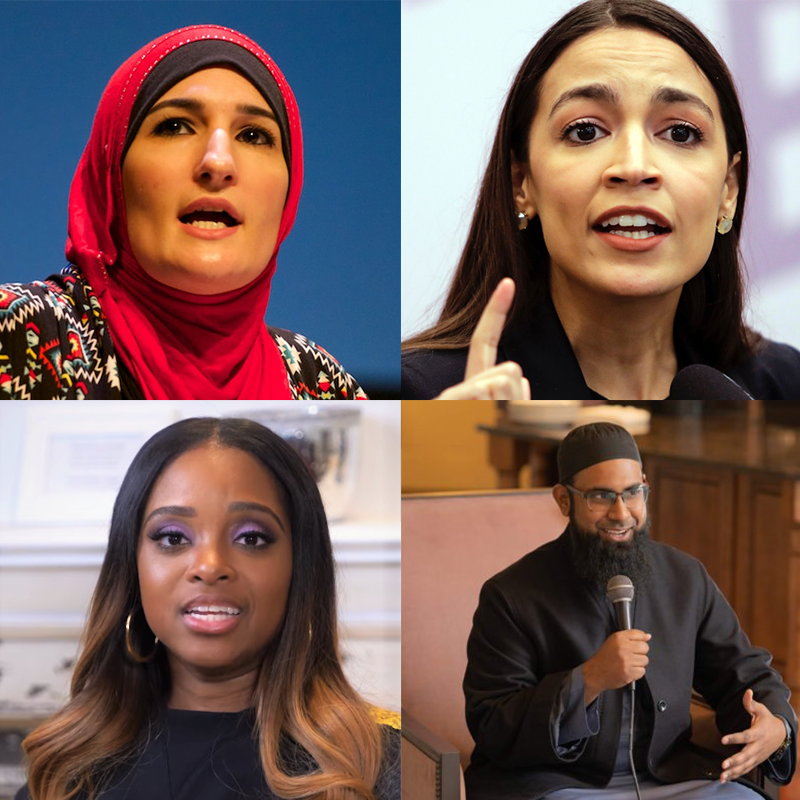 Note: ZOA does not endorse or reject political candidates.

ZOA is horrified, alarmed by, and condemns the roles given to notorious antisemites, Israel-haters and Farrakhan-lovers at the Democratic National Convention (DNC) this past week. The DNC included Linda Sarsour, Tamika Mallory, Imam Noman Hussain, Alexandria Ocasio-Cortez, and Pastor Frederick Haynes. Also, ZOA is deeply concerned that VP Joe Biden ignored ZOA’s and others’ requests to apologize for speaking alongside the worst radical Islamists at the July “Million Muslim Votes Summit,” and ignored our requests to apologize for reciting a Hadith that promotes violent jihad at that summit. Instead, VP Joe Biden “doubled down” by allowing roles for Jew-haters/Israel-haters at the DNC.

The list of deeply problematic speakers at the DNC this week included:

Sarsour appeared on the Democratic National Convention’s Muslims and Allies Assembly livestream. At the DNC, Sarsour, who calls herself a Palestinian-American organizer and card-carrying member of the Democratic Socialists of America (DSA, a group that officially boycotts Israel), proclaimed a temporary alliance with the Democratic Party, and portrayed other Americans as “fascists.” Sarsour stated on the DNC Muslim Allies livestream: “The Democratic Party is not perfect, but it is absolutely our party in this moment. I am here to say that I’m not looking for perfection. I’m looking to defeat fascism and I hope our Muslim American community understands how important this election is.”

Yet hater and radical Pastor Haynes was the featured speaker at the DNC “Our Values” Black caucus event on Monday.

Yet, AOC was given the key role of nominating Bernie Sanders at the DNC. During her DNC appearance, among other things, AOC praised a movement to repair “colonization” – a concept often falsely used to malign Jews, Israel, and American patriots. AOC also called for “reimagined foreign policy” – apparent code that promotes turning against Israel and America’s current democratic allies.

Especially, in light of the troubling fact that a new poll (YouGov published by The Economist) showed that only 24% of Biden supporters and only 18% of Blacks view Israel as an ally, ZOA strongly states that it is imperative that the DNC and VP Biden publicly and unequivocally apologize for these Jew-hating, Israel-bashers’ appearances, and to condemn and disassociate from these antisemites, in no uncertain terms. Their appearances may only lessen support for Israel and increase hostility toward Jews. ZOA urges other Jewish leaders, rabbis, pastors, editorial writers, Christian Zionists, political leaders, and other people of goodwill to also demand a strong apology from former VP Joe Biden.

We would love to hear from you! Please fill out this form and we will get in touch with you shortly.
Trending Z
News August 21, 2020
ZOA Condemns U.S. State Dept. & U.S. Amb. Nides For Siding with Antisemitic, Discriminatory Palestinian & Hamas Terrorists re: the Temple Mount, Violating Jews’ Religious Freedom
News August 21, 2020
ZOA’s Klein JPost Op-Ed: There is Nothing Extreme About Israel’s New Government
Uncategorized August 21, 2020
FLASH: ISRAEL-JORDAN PEACE TREATY (1994) GUARANTEES JEWS ACCESS TO THE TEMPLE MOUNT – LET MY PEOPLE PRAY
Uncategorized August 21, 2020
ZOA Analysis: Most American Rabbis Who Are Boycotting Some Israeli Ministers Are From Extremist Left Wing Groups (J Street; T’ruah; JVP)
Center for Law & Justice
We work to educate the American public and Congress about legal issues in order to advance the interests of Israel and the Jewish people.
We assist American victims of terrorism in vindicating their rights under the law, and seek to hold terrorists and sponsors of terrorism accountable for their actions.
We fight anti-Semitism and anti-Israel bias in the media and on college campuses.
We strive to enforce existing law and also to create new law in order to safeguard the rights of the Jewish people in the United States and Israel.
Our Mission
ZOA STATEMENT
The ZOA speaks out for Israel – in reports, newsletters, and other publications. In speeches in synagogues, churches, and community events, in high schools and colleges from coast to coast. In e-mail action alerts. In op-eds and letters to the editor. In radio and television appearances by ZOA leaders. Always on the front lines of pro-Israel activism, ZOA has made its mark.
Related Articles
OP-ED ZOA Criticizes ADL for Falsely Alleging Trump Advisor Bannon is Anti-Semitic

The Zionist Organization of America (ZOA) organized four other partner organizations to call on Kent State University to stick with its decision to retain a university display featuring Golda Meir, despite ongoing threats and accusations from the so-called anti-Semitic “Students for Justice in Palestine” (SJP) group on campus and its allies.  The display contains a […]