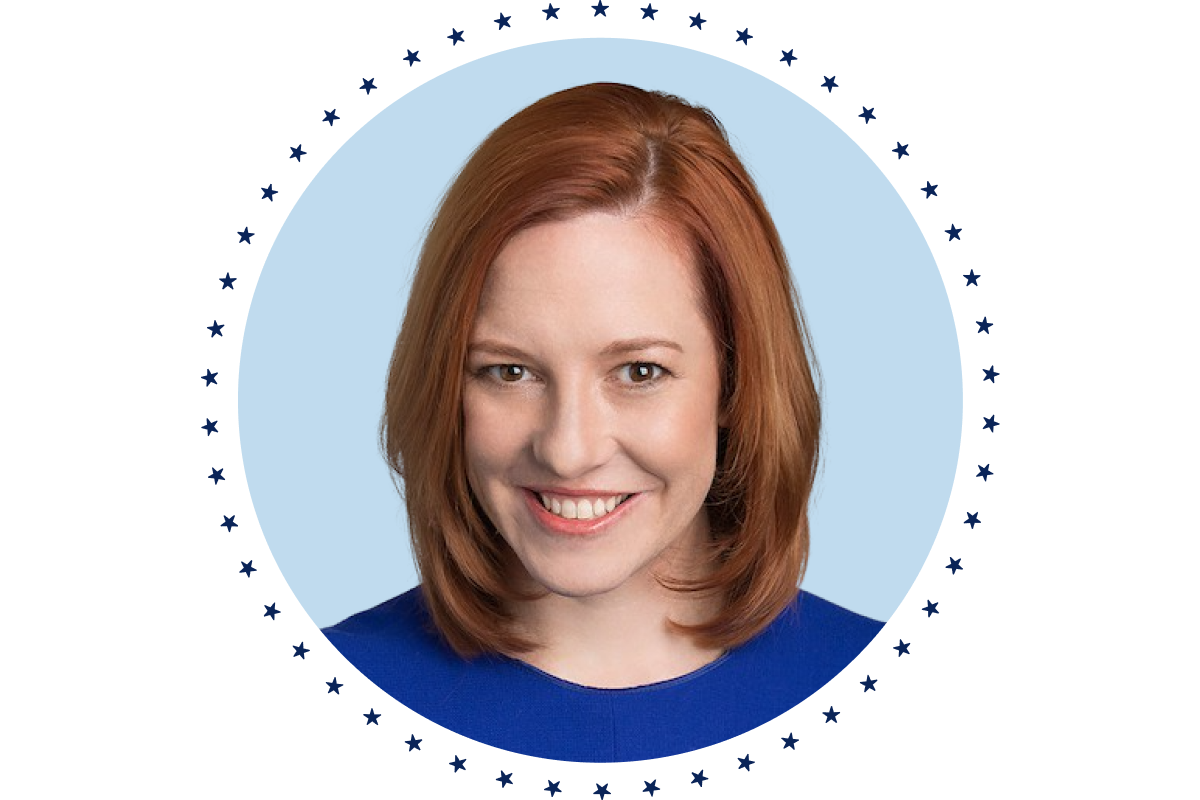 Psaki’s dangerous, hostile-to-Israel, antisemitic and false statements while Psaki served as a State Department spokesperson during the Obama-Biden administration, such as absurdly questioning Israel’s commitment to peace (but never appropriately questioning the Palestinian Arabs’ commitment to peace) and harshly condemning and even threatening consequences if plans to build Jewish homes in Jerusalem moved forward, include  the following:

Psaki Defended U.S. Working with the Hamas-Fatah-PA Unity Government:
During a July 2, 2014 press briefing, Psaki defended the U.S. continuing to work with the Hamas-Fatah-Palestinian Authority (PA) unity government.  (Hamas’ charter calls for Israel’s annihilation and murdering every Jew.  The U.S. designates Hamas as a foreign terrorist organization (“FTO”).  It is unlawful to provide material support or resources to an FTO.  See 18 U.S.C. § 2339B.)  In the same briefing, Psaki also repeatedly falsely portrayed PA dictator Mahmoud Abbas as opposing violence (and failed to mention the fact that Abbas has continued to incite violence, and pays Arab terrorists hundreds of millions of dollars per year to murder Jews and Americans).

Psaki Repeatedly Condemned Building Jewish Homes in Jerusalem, Threatened Consequences, and Cast Aspersions on Israel’s Commitment to Peace:
During a November 3, 2013 press briefing, Psaki condemned an Israeli announcement of plans to build some Jewish homes in eastern Jerusalem.  Psaki said that moving construction plans forward would be “unfortunate”; absurdly said that building these Jewish homes “flies in the face” of creating a climate conducive to a peace deal; and said that the United States and others in the international community “clearly vocalized” that they opposed Israeli construction in “East Jerusalem.”

Even worse, during an October 1, 2014 press briefing, Psaki threatened that if Israel moved forward with plans to build Jewish homes in an area of eastern Jerusalem, this would “send a very troubling message, . . . distance Israel from even its closest allies; poison the atmosphere . . . ; and call into question Israel’s ultimate commitment to a peaceful negotiated settlement with the Palestinians. . . .  [I]t’s not just the United States, it’s the international community who will respond strongly to this kind of continued activity.”

And, during an October 27, 2014 press briefing, Jen Psaki falsely and outrageously condemned plans to build Jewish homes in Jerusalem as “illegitimate” and “incompatible with peace,” saying:  “We continue to make our position absolutely clear that we view settlement activity as illegitimate and unequivocally oppose unilateral steps that prejudge the future of Jerusalem. . . . . [M]oving forward with this type of action would be incompatible with the pursuit of peace, and that is certainly a message that we are conveying directly. . . . [I]f Israel wants to see – wants to live in a peaceful society, they need to take steps to reduce tensions and to avoid steps that are going to be incompatible with peace.”

Condemning and threatening Jews for building homes in the eternal Jewish capital Jerusalem, or in other historic Jewish lands – or anywhere else – is the essence of antisemitism.

Psaki Threatened UN Action Against Israel:  In March 2015, after Israeli Prime Minister Netanyahu stated that he would never agree to a Palestinian (terror) state, Psaki threatened to withdraw traditional U.S. support for Israel at the United Nations, stating: “We’re not going to prejudge what we would do if there was a U.N. action.”

The “Randomgate” Debacle:  Psaki Defended Obama’s False Characterization of the Deadly Islamist Attack at a Paris Kosher Grocery as “Random”; Psaki Also Refused to Admit that Jews were Targeted:
In a 2015 interview with Vox, then-president Obama asserted that the media was “overstating” the threat from terrorism to garner ratings, and characterized the deadly Islamist jihadist attack at a Paris kosher grocery as zealots who “randomly shoot a bunch of folks in a deli in Paris.”

In fact, the jihadist specifically murdered four Jews at the Paris kosher market. During the hostage siege, the jihadist told journalists that he was targeting Jews in order to “defend” Muslim and Palestinians.  The jihadist also declared to the press: “I have 16 hostages and I have killed four. I targeted them because they were Jewish.”  In addition, the jihadist (a criminal who was radicalized by an Imam in prison) had a map marked with Jewish schools in his car, whom he planned to attack next.  (See “The Not So “Random” Deli Shootings,” by Harold Brackman, Jewish Journal, Feb. 11, 2015, which also condemned Psaki’s stonewalling on this matter.)

As Israel National News reported, Obama’s “statement provoked widespread outrage, with viewers taking to social media to ask how an attack by a follower of a virulently anti-Semitic ideology on a kosher store could be seen as ‘random,’ rather than as an attack against the Jewish community.”

Spokesperson Psaki added fuel to the fire, by refusing to acknowledge that the attack was antisemitic, or that that the attack targeted Jews.  Psaki moreover outright lied, by claiming that the victims came from other backgrounds, and repeatedly evaded simple direct questions about the U.S. administration’s view of the attack, in the following mind-boggling exchange (video).

As one of the many op-eds condemning Obama’s and Psaki’s statements noted: “[A]cts of anti-Semitism should be acknowledged and condemned. . . [W] e can fight terrorism most effectively only if we understand and speak honestly about the threats we are facing.”  (“Yes, It Was Antisemitism,” Providence Journal, Feb. 15, 2015.)   See also “Why Obama Won’t Talk About Islamic Terrorism,” by David Frum, The Atlantic, Feb. 16, 2015 (noting that the Obama administration, including Psaki, portrayed the kosher grocery attacks as “random,” to avoid identifying and addressing the antisemitism of Islamic terrorists).

Incredibly, Psaki later pretended that she had not made the above comments.  (See “Antisemitic Horrors Don’t Exist in Obama’s World,” by John Podhoretz, New York Post, Feb. 11, 2015.)

Someone willing to lie and twist words into a pretzel in order to avoid acknowledging an Islamic jihadist’s clear antisemitic motives, and the Jewish faith of the jihadist’s victims, is unfit to serve as press secretary.

Psaki Promoted Sending Funds to the Corrupt, Terror-Inciter PA, After the PA Breached Oslo By Suing Israel in the ICC:
In January 2015, the Palestinian Authority breached the Oslo Accords by unilaterally going to the International Criminal Court (ICC) to sue Israel for invented “war crimes.”   Israel appropriately responded by suspending sending $127 million of tax revenues to the PA.  During a March 18, 2015 press briefing, Psaki ignored the PA’s unlawful action at the ICC, and instead complained about Israel’s appropriate response, and promoted funding for the PA, saying: “we’re very concerned about the continued viability of the Palestinian Authority if they do not receive funds soon, either in terms of the resumption of monthly Israeli transfers of Palestinian tax revenues or additional donor assistance.”   Psaki moreover ignored that the PA was still spending hundreds of millions of dollars per year to pay terrorists to murder Jews and Americans – and could obviously have curtailed those heinous payments if the PA were really in such dire financial straits.

Psaki is Responsible for Her Statements:
The Public Relations Society of America Code of Ethics requires spokespersons to “investigate the truthfulness and accuracy of information released on behalf of those represented.”  Thus, the argument that Psaki was simply “following orders” as a spokesperson for the Obama-Biden administration does not excuse Psaki’s false, misleading, hostile statements.  Further, Psaki appeared to eagerly speak against Israel, and often began her sentences with “we” and “I” – thereby including herself in her statements.  She is unfit to serve as a White House press secretary.

We would love to hear from you! Please fill out this form and we will get in touch with you shortly.
Trending Z
News January 4, 2021
ZOA Condemns U.S. State Dept. & U.S. Amb. Nides For Siding with Antisemitic, Discriminatory Palestinian & Hamas Terrorists re: the Temple Mount, Violating Jews’ Religious Freedom
Uncategorized January 4, 2021
FLASH: ISRAEL-JORDAN PEACE TREATY (1994) GUARANTEES JEWS ACCESS TO THE TEMPLE MOUNT – LET MY PEOPLE PRAY
Uncategorized January 4, 2021
ZOA Analysis: Most American Rabbis Who Are Boycotting Some Israeli Ministers Are From Extremist Left Wing Groups (J Street; T’ruah; JVP)
Uncategorized January 4, 2021
Israel’s “Right of Return” Grandparent Clause is De-Judaizing the Jewish State – Eliminate It
Center for Law & Justice
We work to educate the American public and Congress about legal issues in order to advance the interests of Israel and the Jewish people.
We assist American victims of terrorism in vindicating their rights under the law, and seek to hold terrorists and sponsors of terrorism accountable for their actions.
We fight anti-Semitism and anti-Israel bias in the media and on college campuses.
We strive to enforce existing law and also to create new law in order to safeguard the rights of the Jewish people in the United States and Israel.
Our Mission
ZOA STATEMENT
The ZOA speaks out for Israel – in reports, newsletters, and other publications. In speeches in synagogues, churches, and community events, in high schools and colleges from coast to coast. In e-mail action alerts. In op-eds and letters to the editor. In radio and television appearances by ZOA leaders. Always on the front lines of pro-Israel activism, ZOA has made its mark.
Connect with us
Sign up for our Newsletter