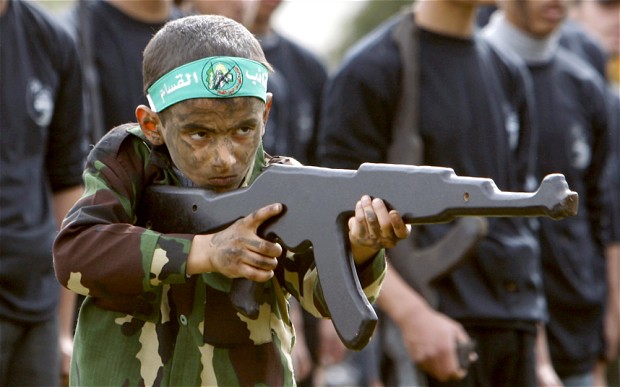 The scheme has been criticised by Palestinian human rights groups, who point out that Hamas has previously banned sport from the school curriculum on the grounds that there is not enough time for it.

Hamas authorities introduced the ‘Futuwwa’, or youth programme into the state curriculum last September for 37,000 Palestinian boys aged between 15 and 17, conceiving it as a scheme intended to initiate a new generation of Palestinian men in the struggle against Israel.

Izzadine Mohamed, 17, was among the students who attended the weekly school classes, which covered first aid, basic fire fighting skills and how to fire a Kalashnikov rifle. He was also one of 5,000 boys across Gaza who also signed up for an optional two-week camp held at a Hamas military base.

“I was excited to learn the right way to use a weapon,” said Mr Mohamed. “It’s important because of the occupation. I feel stronger and more confident with the knowledge, which I could use against the occupier.”

We would love to hear from you! Please fill out this form and we will get in touch with you shortly.
Trending Z
News April 30, 2013
ZOA Condemns U.S. State Dept. & U.S. Amb. Nides For Siding with Antisemitic, Discriminatory Palestinian & Hamas Terrorists re: the Temple Mount, Violating Jews’ Religious Freedom
News April 30, 2013
ZOA’s Klein JPost Op-Ed: There is Nothing Extreme About Israel’s New Government
Uncategorized April 30, 2013
FLASH: ISRAEL-JORDAN PEACE TREATY (1994) GUARANTEES JEWS ACCESS TO THE TEMPLE MOUNT – LET MY PEOPLE PRAY
Uncategorized April 30, 2013
ZOA Analysis: Most American Rabbis Who Are Boycotting Some Israeli Ministers Are From Extremist Left Wing Groups (J Street; T’ruah; JVP)
Center for Law & Justice
We work to educate the American public and Congress about legal issues in order to advance the interests of Israel and the Jewish people.
We assist American victims of terrorism in vindicating their rights under the law, and seek to hold terrorists and sponsors of terrorism accountable for their actions.
We fight anti-Semitism and anti-Israel bias in the media and on college campuses.
We strive to enforce existing law and also to create new law in order to safeguard the rights of the Jewish people in the United States and Israel.
Our Mission
ZOA STATEMENT
The ZOA speaks out for Israel – in reports, newsletters, and other publications. In speeches in synagogues, churches, and community events, in high schools and colleges from coast to coast. In e-mail action alerts. In op-eds and letters to the editor. In radio and television appearances by ZOA leaders. Always on the front lines of pro-Israel activism, ZOA has made its mark.
Related Articles
OP-ED BY: HonestReporting.com UN Exonerates Israel in Gaza Child Death, Ignored by Media

Posted on March 13, 2013 (JNS.org) Hamas is looking to increase suicide bomb efforts, rocket attacks and the kidnapping of Israeli soldiers, particularly in the West Bank, according to a report by Israel’s domestic security agency, the Shin Bet. “On the surface, the four-month truce between Israel and Hamas appears to be holding well since […]