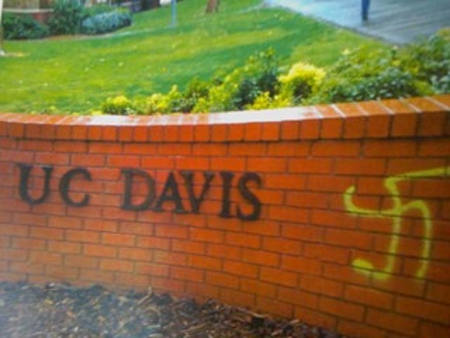 The ZOA and 22 other organizations today wrote to Linda P.B. Katehi, Chancellor of the University of California, Davis, urging an investigation into the conduct of the hate group, Students for Justice in Palestine (SJP), and one of its members, Azka Fayyaz – who also is a student senator – and the imposition of sanctions for any violations of university policy.  (A copy of the letter is reprinted below.)

On January 29, 2015, the UC Davis student government passed an anti-Israel divestment resolution written and promoted by the SJP.  A video of the student government meeting shows that as Jewish and pro-Israel students left the room, they were heckled with loud chanting of “Allahu Akbar.”  Later, SJP member and student senator Azka Fayyaz celebrated the passage of the resolution on Facebook, with postings promoting violence against Jews and the destruction of Israel.

Two days after the divestment vote and Fayyaz’s Facebook postings, the AEPi Jewish fraternity house was vandalized on the Jewish Sabbath, spray-painted with swastikas.  Then the Hillel house across from campus was vandalized.

Two days after the divestment… the AEPi Jewish fraternity house was vandalized on the Jewish Sabbath, spray-painted with swastikas

In their letter to Chancellor Katehi, the ZOA and other groups noted that the conduct of the SJP and Fayyaz was anti-Semitic, according to U.S. government standards.  “Given these open expressions of anti-Semitic hate and bigotry by the SJP and Azka Fayyaz,” the groups wrote to Katehi, “it can hardly be surprising that less than two days after the divestment vote and Fayyaz’s Facebook postings, the house of the Jewish fraternity AEPi was vandalized.”

The 23 groups urged the Chancellor to investigate whether the SJP and Fayyaz violated university policies, including those prohibiting threatening the health and safety of others, harassment, disturbing the peace, and expressing intent to terrorize.  If the evidence substantiates their wrongdoing, then the SJP’s registration should be revoked and it should lose all group privileges “until it can demonstrate that, like other student groups, it can conform its conduct to the university’s rules and the Principles of Community,” the groups wrote.  In addition, Azka Fayyaz should be removed from her position in the student senate, “since her hateful anti-Semitic conduct does not serve the student body she was elected to represent.”

ZOA National President Morton A. Klein praised Chancellor Katehi for some appropriate steps taken already but stressed that additional action was necessary:  “Chancellor Katehi did the right thing by publicly condemning the anti-Semitic vandalism and calling for a police investigation into the vandalism as a hate crime. But more needs to be done to send a clear message to hate groups like the SJP that anti-Semitism and violations of university policy impairing the rights of others will not be tolerated.”

Click here to view PDF
Get updates from ZOA We don’t spam. You will receive our unique content

We would love to hear from you! Please fill out this form and we will get in touch with you shortly.
Trending Z
Uncategorized February 10, 2015
FLASH: ISRAEL-JORDAN PEACE TREATY (1994) GUARANTEES JEWS ACCESS TO THE TEMPLE MOUNT – LET MY PEOPLE PRAY
Uncategorized February 10, 2015
ZOA Analysis: Most American Rabbis Who Are Boycotting Some Israeli Ministers Are From Extremist Left Wing Groups (J Street; T’ruah; JVP)
Uncategorized February 10, 2015
Israel’s “Right of Return” Grandparent Clause is De-Judaizing the Jewish State – Eliminate It
Uncategorized February 10, 2015
Exclusive: ZOA Accuses Ilhan Omar of Hating the U.S. ‘as Much as Israel,’ Lauds Kevin McCarthy for ‘Throwing Her Off the HFAC’
Center for Law & Justice
We work to educate the American public and Congress about legal issues in order to advance the interests of Israel and the Jewish people.
We assist American victims of terrorism in vindicating their rights under the law, and seek to hold terrorists and sponsors of terrorism accountable for their actions.
We fight anti-Semitism and anti-Israel bias in the media and on college campuses.
We strive to enforce existing law and also to create new law in order to safeguard the rights of the Jewish people in the United States and Israel.
Our Mission
ZOA STATEMENT
The ZOA speaks out for Israel – in reports, newsletters, and other publications. In speeches in synagogues, churches, and community events, in high schools and colleges from coast to coast. In e-mail action alerts. In op-eds and letters to the editor. In radio and television appearances by ZOA leaders. Always on the front lines of pro-Israel activism, ZOA has made its mark.
Related Articles
OP-ED ZOA: Natl. Jewish Democratic Council Should Oppose Hagel Nomination As It Did In 2009