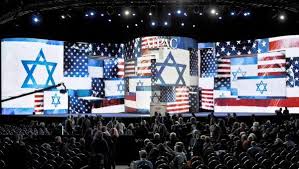 ZOA: AIPAC Must Apologize for Condemning Trump on His Criticism of Obama
News Press Release

On Monday evening, at AIPAC’s invitation, Donald Trump presented his views on the Arab war against Israel at AIPAC’s policy conference.  It is  innappropriate that AIPAC’s leaders then turned around the next morning and condemned Trump’s appropriate criticism of President Obama’s anti-Israel policies. It was also disgraceful that AIPAC’s leaders chastised the rank-and-file AIPAC audience for cheering Trump’s well-justified condemnation of President Obama.

Trump was asked to present his views on the current situation affecting Israel. Trump wasn’t asked to present AIPAC’s opinion in the way that AIPAC wanted. Everyone understands that speeches given at such a conference are the personal beliefs of the speaker — not AIPAC’s. It was ludicrous and wrong for AIPAC to have publicly taken issue with wholly justified concerns of Obama’s policies toward Israel.

As ZOA has repeatedly documented, President Obama’s actions have indeed been extremely harmful towards America and Israel.

“…We deeply respect the office of the President of the United States and our President, Barack Obama.  We are disappointed that so many people applauded a sentiment that we neither agree with nor condone…”

“With President Obama in his final year — yay!  He may be the worst thing to ever happen to Israel, believe me, believe me.  And you know it, and you know it better than anybody.”

As ZOA has repeatedly documented, President Obama’s actions have indeed been extremely harmful towards America and Israel.  See a long list of Obama’s harmful actions here.   In addition, just in the past few months:

Obama questioned maintaining the cornerstone of Israel’s security, or Israel’s qualitative military edge (QME) – despite US law requiring the US to assure Israel’s QME (March 2016).

Obama singled out the pro-Israel portion of the trade bill for condemnation (Feb 2016) and issued an anti-Israel labeling requirement on January 23, 2016.

Reports indicated that Obama is ordering destruction of records of Islamic terrorism (Feb. 11, 2016).

Obama’s spoke at a radical mosque, during which he misrepresented Islamic history (Feb. 3, 2016).

The Obama administration helped the PLO terrorist group and Palestinian Authority in a terrorism lawsuit in the Southern District of New York federal court, after a jury found the PLO and PA liable for millions of dollars in damages for their role in several terrorist attacks in Israel — that resulted in the murder and maiming of innocent American citizens (August 2015).

AIPAC’s Leaders Should Speak Out Against the Real “Divisive” Remarks, by Sec’y Clinton and Sen. Sanders:

If AIPAC’s leaders are concerned about “divisiveness,” why did AIPAC’s leaders remain silent about the troubling, divisive aspects of Secretary Hillary Clinton’s Monday morning AIPAC speech?  Secretary Clinton openly declared to the conference attendees that we have ‘differences’, then praised the Iran deal (which AIPAC, ZOA and all credible pro-Israel organizations fought against), and blasted Israeli settlements (Jewish towns and villages in historical Jewish lands) as ‘damaging’.

Also, why did AIPAC’s leaders remain silent about Senator Bernie Sanders’ Middle East Policy speech, given in Utah the same day as the AIPAC policy conference?   In his outrageously divisive speech, Sanders praised the Iran deal, falsely condemned Israel for “occupation of Palestinian territory,” demanded that Israel “pull back settlements in the West Bank, just as Israel did in Gaza” (ignoring the fact that Israel’s evacuation of every Jew from Gaza was an absolute disaster that has already subjected innocent Israeli civilians to tens of thousands of rocket attacks from now, Hamas-run, Gaza).  Adding further insult to injury, Sanders called Israel’s necessary response to Hamas’s rocket attacks “disproportionate.”   Sanders falsely grossly overstated the numbers of civilians killed in Gaza, and ignored Israel’s extraordinary efforts to avoid harming civilians –- while Hamas deliberately used civilians as human shields.

We would love to hear from you! Please fill out this form and we will get in touch with you shortly.
Trending Z
Uncategorized March 24, 2016
ZOA Analysis: Most American Rabbis Who Are Boycotting Some Israeli Ministers Are From Extremist Left Wing Groups (J Street; T’ruah; JVP)
Uncategorized March 24, 2016
ZOA: Israel’s Reasonable Judicial Reform Proposals Are Good for Democracy, the Rule of Law and the Economy
Uncategorized March 24, 2016
Israel’s “Right of Return” Grandparent Clause is De-Judaizing the Jewish State – Eliminate It
News March 24, 2016
ZOA is Disappointed, Offended and Frightened by 211 U.S. House Votes Supporting Jew-Hating, Israel-Hating Rep. Ilhan Omar
Center for Law & Justice
We work to educate the American public and Congress about legal issues in order to advance the interests of Israel and the Jewish people.
We assist American victims of terrorism in vindicating their rights under the law, and seek to hold terrorists and sponsors of terrorism accountable for their actions.
We fight anti-Semitism and anti-Israel bias in the media and on college campuses.
We strive to enforce existing law and also to create new law in order to safeguard the rights of the Jewish people in the United States and Israel.
Our Mission
ZOA STATEMENT
The ZOA speaks out for Israel – in reports, newsletters, and other publications. In speeches in synagogues, churches, and community events, in high schools and colleges from coast to coast. In e-mail action alerts. In op-eds and letters to the editor. In radio and television appearances by ZOA leaders. Always on the front lines of pro-Israel activism, ZOA has made its mark.
Related Articles
OP-ED BY: ZOA Glorification of Jew-Killer Underscores Israel’s Rejection by Neighbors