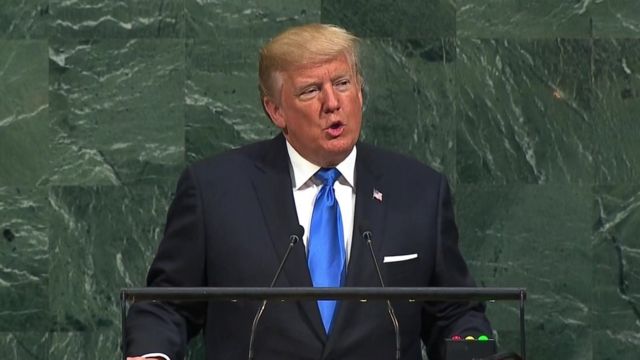 The Zionist Organization of America (ZOA) has opposed the Trump Administration not going forward, as initially claimed, to close the Palestine Liberation Organization (PLO) office in Washington, D.C., which ignores continuing Palestinian Authority (PA) violations of the Oslo Accords.These violations require that the PLO office be shuttered.

The PLO office was opened in 2010 during the Obama Administration, according to Haaretz at the time, “as one of several steps [the Obama Administration intended] to take in an effort to entice Palestinian President Mahmoud Abbas into direct talks with Israel.” In fact, the PA only attended two meetings with the Israelis in the past nine years and has completely refused to negotiate with Israel. However, despite this US concession to the PA having utterly failed to bring about the sought-after results, the PLO office in Washington has remained open.

The PLO office was to have been shut down because of continuing PA pro/terror, anti-peace activities, including incitement to hatred and murder of Jews in the PA-controlled media, mosques, schools and youth camps, paying Arabs to murder Jews and seeking delegitimization of Israel and internationalization of the conflict through international organizations.

Secretary of State Rex Tillerson had informed the PLO office earlier this month that it was operating in a manner inconsistent with US law that required its closure if Palestinians seek to have Israelis prosecuted for alleged crimes against Palestinian Arabs, something which it had done in September when PA dictator Mahmoud Abbas called for the International Criminal Court to investigate and prosecute Israelis.

Secretary of State Rex Tillerson had informed the PLO office earlier this month that it was operating in a manner inconsistent with US law that required its closure – so why is it still open?

However, the Trump Administration has now said that the PLO Office will remain open for the next 90 days, providing that its activities are limited to actions that support efforts to renew peace talks. State Department spokesman Edgar Vasquez said the US has “advised the PLO Office to limit its activities to those related to achieving a lasting, comprehensive peace between the Israelis and Palestinians” (Jose Olivares, ‘U.S. Reverses Its Decision To Close Palestinian Office In D.C.,’ National Public Radio, November 25, 2017).

Further, the stated limitations on the PLO Office’s activities could be lifted after 90 days if the US determines that Israelis and Palestinians are engaged in serious peace talks.

ZOA National President Morton A. Klein said, “This is a disappointing and deeply worrying decision. Not only does the PLO office remain open, but it could have restrictions on its activities lifted within three months.

“This is the very opposite of holding the PA accountable.

“The ZOA opposed upgrading the diplomatic status of Mahmoud Abbas’ PA in 2010 by granting its PLO mission in Washington the status of a ‘general delegation.’

“We regarded it then, as we do its continuance now, as a reward for continuing PA incitement to hatred and murder against Israel, as well as other pro-terror, anti-peace acts.

“This 2010 upgrade to the diplomatic status of the PA also gave its representatives something they did not have before –– diplomatic immunity.

“This upgrade occurred despite the complete absence of PA action to arrest terrorists and end incitement to hatred and murder against Israel in the PA-controlled media, mosques, schools and youth camps. The PA has enjoyed this upgrade now for seven years without doing anything in these areas to even retrospectively justify it.

“And it is now being permitted to continue by the Trump Administration, despite recent PA moves to have Israelis put in the dock in international courts, a move directly and explicitly prohibited under legislation permitting the operation of the PLO office.

“This is a serious mistake which will erode US credibility to enforce its own laws and to hold the PA accountable, something President Trump has rightly said must be a feature of US policy going forward.

WAS THIS DUE TO PRESSURE FROM NSC’s Hostile-to-Israel McMASTER AND BAUMAN?!

“We are seriously concerned at the direction the Trump Administration is taking on this matter as well as on their hesitation to fulfill their promise to move the Embassy to Jerusalem. Informed sources tell ZOA that these policy decisions may well be due to the influence of hostile-to-Israel National Security Adviser, General McMaster, and former Obama official who’s been hostile-to-Israel Colonel Kris Bauman, one of General McMaster’s new appointees, who replaced the pro-Israel advisors that McMaster fired.

“As we described in an Algemeiner opinion piece in August, General McMaster has shown himself to be opposed to key aspects of President Trump’s stated policies. In addition to firing or removing many key pro-Israel officials at the National Security Council like Ezra Cohen, Derek Harvey and Adam Lovinger, he has been recorded as referring to Israel as an ‘illegitimate,’ ‘occupying power,’ suggested (wrongly as it turned out) that President Trump would recognize Palestinian self-determination during his visit to Israel earlier this year; opposed President Trump being accompanied to the Western Wall by Israeli Prime Minister Benjamin Netanyahu; and described Israel’s installation of metal detectors at Jerusalem’s Temple Mount after Palestinian terrorists smuggled in firearms and murdered two Israeli policemen, as ‘just another excuse by the Israelis to repress the Arabs.’

“General McMaster brought in as an official Colonel Kris Bauman, who has blamed Israel for Palestinian terror and urged Israel to negotiate with Hamas. Bauman, as we described in a Jerusalem Post opinion piece in February, is working to revive General Jim Allen’s defective and dangerous Obama-era plan for Palestinian statehood, with its reliance on foreign forces and an impossible-to-enforce Palestinian demilitarization.

“Ignoring PA anti-peace acts and giving it a free pass is entirely consistent with the view that establishing a Palestinian state is the solution and panacea for all existing problems. We hope we are mistaken, but we are concerned at the direction the Administration appears to be taking.”

We would love to hear from you! Please fill out this form and we will get in touch with you shortly.
Trending Z
News November 29, 2017
ZOA Condemns U.S. State Dept. & U.S. Amb. Nides For Siding with Antisemitic, Discriminatory Palestinian & Hamas Terrorists re: the Temple Mount, Violating Jews’ Religious Freedom
News November 29, 2017
ZOA’s Klein JPost Op-Ed: There is Nothing Extreme About Israel’s New Government
Uncategorized November 29, 2017
FLASH: ISRAEL-JORDAN PEACE TREATY (1994) GUARANTEES JEWS ACCESS TO THE TEMPLE MOUNT – LET MY PEOPLE PRAY
Uncategorized November 29, 2017
ZOA Analysis: Most American Rabbis Who Are Boycotting Some Israeli Ministers Are From Extremist Left Wing Groups (J Street; T’ruah; JVP)
Center for Law & Justice
We work to educate the American public and Congress about legal issues in order to advance the interests of Israel and the Jewish people.
We assist American victims of terrorism in vindicating their rights under the law, and seek to hold terrorists and sponsors of terrorism accountable for their actions.
We fight anti-Semitism and anti-Israel bias in the media and on college campuses.
We strive to enforce existing law and also to create new law in order to safeguard the rights of the Jewish people in the United States and Israel.
Our Mission
ZOA STATEMENT
The ZOA speaks out for Israel – in reports, newsletters, and other publications. In speeches in synagogues, churches, and community events, in high schools and colleges from coast to coast. In e-mail action alerts. In op-eds and letters to the editor. In radio and television appearances by ZOA leaders. Always on the front lines of pro-Israel activism, ZOA has made its mark.
Related Articles
OP-ED P.A.’s Abbas Reiterates His Long-Standing Holocaust Denial

OP-ED BY: ZOA Staff P.A. Official Khatib Says Any Pal. Who Murders a Jew, Yesterday, Today, or Tomorrow, Must Be Released