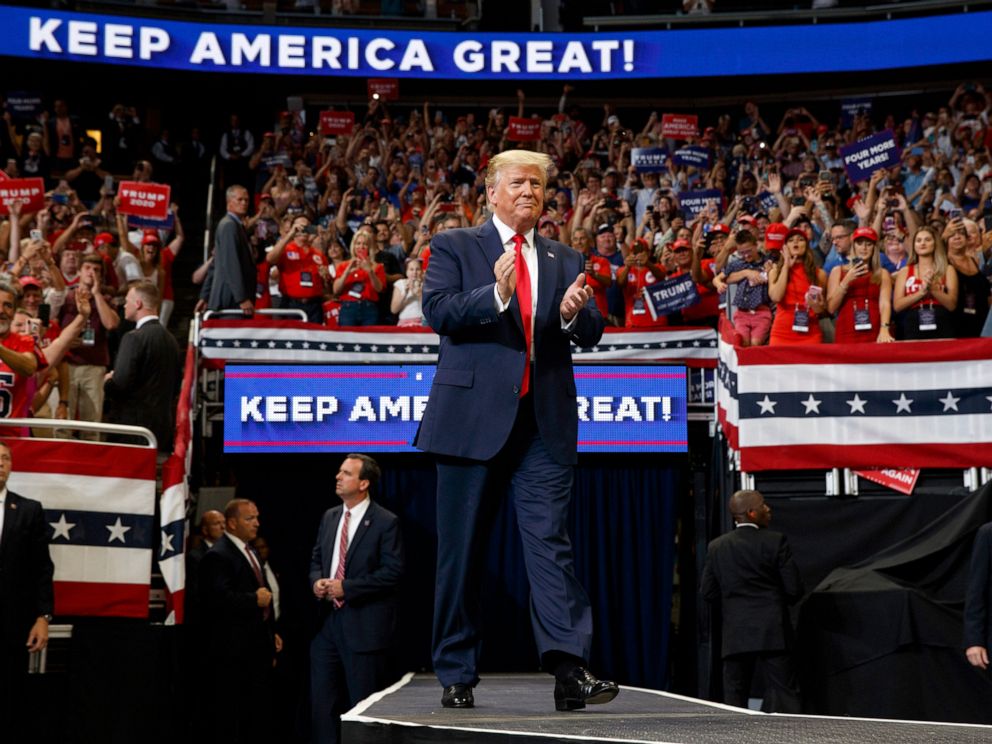 “Congresswoman Omar is an America-hating socialist. She minimized the September 11th attack on our homeland. Where 3,000 people died, saying, ‘Some people did something,’ big deal, pleaded for compassion for ISIS recruits right here in Minnesota. Omar laughed that Americans speak of Al-Qaeda. You remember that tape? Speak of Al-Qaeda. But when we say something about the United States, you just don’t say America with any intensity. Remember that?  Representative Omar has a history of launching virulent anti-Semitic screeds, whether you like it or not. She’s said the US support for Israel is ‘all about the Benjamins’. She said that pro-Israel lawmakers have an allegiance to a foreign country. Omar wrote that Israel has hypnotized the world, may Allah awaken the people and help them to see the evil doings of Israel and the United States. . . . She is a disgrace to our country. . . .”  [Crowd cheers]

It is gratifying to have a president who stands up and denounces Congresswoman Ilhan’s horrendous record of promoting hatred against Jews, Israel, and America. And thank you, President Trump, for inveighing against how Omar urged compassion for ISIS terrorists, how Omar belittled Americans who fear Al Qaeda and Hezbollah, and Omar’s cavalier, dismissive attitude towards the Americans murdered by Al Qaeda on 9-11.  Importantly, President Trump also previously condemned and demanded that action be taken against Ilhan Omar for her hateful anti-Semitic statements. (See “ZOA Applauds Pres. Trump’s Call For Rep. Omar To Resign Over Anti-Semitic Tweets,” Feb. 15, 2019.)

ZOA has been documenting Ilhan Omar’ anti-Semitic, anti-American record.  ZOA and our wonderful activists have repeatedly urged the Congressional Democratic leadership to remove Omar from her powerful position on the House Foreign Affairs Committee. ZOA President Morton Klein also demanded Omar’s removal from her committees when he testified before Congress in April. It’s long past time for this to be done.

We would love to hear from you! Please fill out this form and we will get in touch with you shortly.
Trending Z
News October 11, 2019
ZOA Condemns U.S. State Dept. & U.S. Amb. Nides For Siding with Antisemitic, Discriminatory Palestinian & Hamas Terrorists re: the Temple Mount, Violating Jews’ Religious Freedom
News October 11, 2019
ZOA’s Klein JPost Op-Ed: There is Nothing Extreme About Israel’s New Government
Uncategorized October 11, 2019
FLASH: ISRAEL-JORDAN PEACE TREATY (1994) GUARANTEES JEWS ACCESS TO THE TEMPLE MOUNT – LET MY PEOPLE PRAY
Uncategorized October 11, 2019
ZOA Analysis: Most American Rabbis Who Are Boycotting Some Israeli Ministers Are From Extremist Left Wing Groups (J Street; T’ruah; JVP)
Center for Law & Justice
We work to educate the American public and Congress about legal issues in order to advance the interests of Israel and the Jewish people.
We assist American victims of terrorism in vindicating their rights under the law, and seek to hold terrorists and sponsors of terrorism accountable for their actions.
We fight anti-Semitism and anti-Israel bias in the media and on college campuses.
We strive to enforce existing law and also to create new law in order to safeguard the rights of the Jewish people in the United States and Israel.
Our Mission
ZOA STATEMENT
The ZOA speaks out for Israel – in reports, newsletters, and other publications. In speeches in synagogues, churches, and community events, in high schools and colleges from coast to coast. In e-mail action alerts. In op-eds and letters to the editor. In radio and television appearances by ZOA leaders. Always on the front lines of pro-Israel activism, ZOA has made its mark.
Related Articles
OP-ED ZOA Condemns Stanford’s Inaction – Renews Call for Expulsion of Student Who Threatened Jews

Zionist Organization of America (ZOA) President Morton A. Klein released the following statement: The ZOA strongly praises President Trump’s refreshingly honest superb speech at the United Nations yesterday.  The president pointed out that the Iranian Islamist regime “chants Death to America,” “threatens Israel with annihilation,” and “cannot allow them the means to deliver a nuclear warhead […]